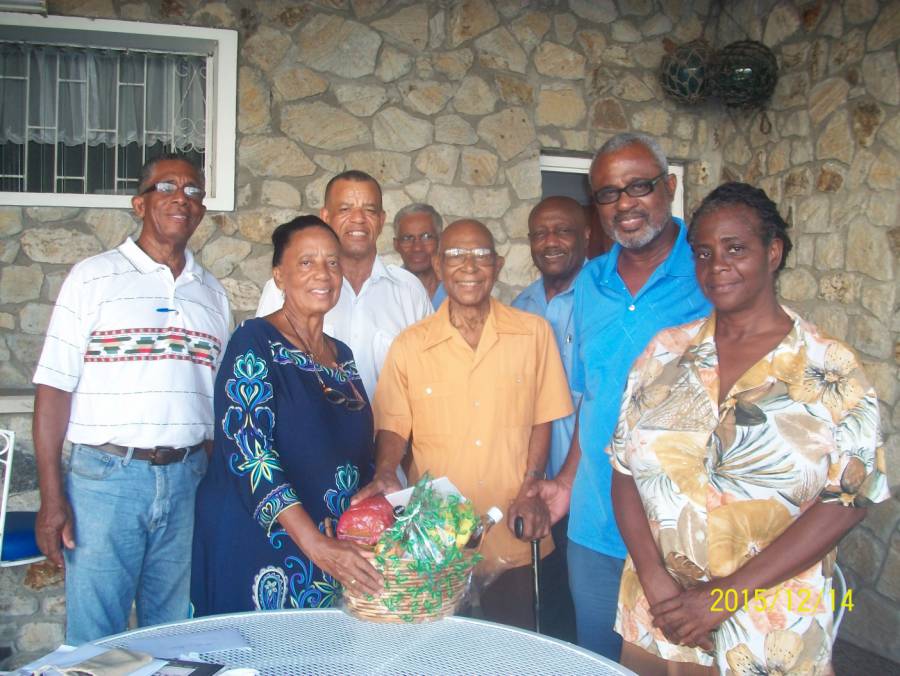 the executive and senior members of the Willie Redhead Foundation paid a courtesy call on Mr Arnold Cruickshank CBE, a retired member and former director of the Foundation at his Old Fort Home, to convey Yuletide greetings and to wish him well.
Share

It was during the afternoon of Monday, 14 December 2015, that the executive and senior members of the Willie Redhead Foundation paid a courtesy call to Mr Arnold Cruickshank CBE, a retired member and former director of the Foundation at his Old Fort Home, to convey Yuletide greetings and to wish him well.

An Agricultural Agronomist by profession, Arnold was educated at the Imperial College of Tropical Agriculture in Trinidad and Cornell University in the USA — He holds a Diploma in Agriculture and a M.Sc Agriculture majoring in Agronomy.

Arnold’s career included services at the local, regional and international levels here in Grenada at the Ministry of Agriculture, at Caribbean Development Bank in Barbados and at the Food and Agricultural Organization in Rome, Italy.

In July 1991, Arnold M. Cruickshank was awarded the Insignia of Commander of the British Empire (CBE) by Her Majesty, the Queen for “Services to Agriculture”.

In 1983/1984, Arnold Cruickshank served as the member of the interim Council of Government with responsibility for Agriculture. This interim Council bridged the gap between the demise of the People Revolutionary Government and the restoration of Democratic Government in 1984.

Arnold’s association with the Willie Redhead Foundation dates back to 1998 as an ordinary member. Between the years 2000 and 2012, he served as a member of the Board of Directors and in 2012 he became an Honorary Member.

The president, executive and members take this opportunity to congratulate Arnold on his life’s achievements as a statesman, nation builder and agricultural development expert, and to wish him Godspeed.

NOW Grenada is not responsible for the opinions, statements or media content presented by contributors. In case of abuse, click here to report.
Tags: arnold cruickshankchristmassentineltwrfwillie redhead foundation
Next Post