This story was posted 6 years ago
in OPINION/COMMENTARY
9 min. read


The Constitution of Grenada has always been in question; and even after counting to 42 years, there is no genuine ‘attitude and approach’ by the powers-that-be to remedy the conspicuous concerns. The circumstances surrounding the introduction of the Constitution in February 1974 and the festering into the March 1979 Revolution, paint an unpleasant history for Grenada. The deficiencies in the Constitution and the abuses with impunity in its application, sustain maladministration and underdevelopment in the nation.

The consultative process on constitutional reform began officially in February 1985, and the process has been with many controversies and falsities throughout and escalating. The previous article “Grenada Constitution Reform: putting within context”, presents the background, rationales and support for the drive on reforming the Constitution and it also highlights the deviations, hassles and challenges which the Reform Project faces.

In January 2014, a Cabinet-appointed so-called independent broad-based Constitution Reform Advisory Committee (CRAC) was launched, with the chairmanship given to Dr Francis Alexis QC. The CRAC was essentially to continue the consultative process of constitutional reform towards a referendum on the Constitution, in a transparent, credible and consensus manner. The existence and operation of CRAC however, further taint the process and shatter any confidence of the people in the process. Most critical and telling is that the reviews and proposals for rectifying and enhancing the constitution have not met the ‘aspirations and desires’ of the people, but instead the pertinent reports and resolves reveal a conspiracy against the people. A related article “Grenada Constitution Reform: CRAC ultra vires”, presents the criticisms, confusions and cracks of CRAC, and the calls for an appropriate and acceptable mechanism to ‘finalize’ the Reform Project.

It is now 2 years and counting that Grenadians are placed in an awkward position, particularly on the repeatedly postponements of the date for a constitutional referendum. Moreover, the electorates are asked to vote in the referendum, but with no substantial readiness on the part of the Government and of the people for such a costly consequential venture. Proper institutional arrangement and financial capacity of the Government for the referendum is lacking, as well as moderate awareness and sensitization of the people on the pertinent issues; political expediency seems to be the order of the day. The intent, know-how, strategy and resources of the powers-that-be for the referendum are brought into question, and thus necessitating the assistance and observance of international democratic bodies such as the United Nations Development Programme (UNDP) on the Reform Project.

Since the renewed commitment shown by the UNDP in the Reform Project from October/November 2014, UNDP had several ‘technical missions’ to Grenada and after analyzing the level of readiness and the areas of needs for the constitutional referendum, it prepared and submitted a Project Document which includes an allocation of funds and a work-plan for achieving the object of the project. Underpinning the object of the project is to ensure inclusiveness and participation, as well as transparency and credibility, with strong inputs from the people. Amongst the recommendations, the Document outlines the “challenges and risks” for a successful referendum; a key factor of attention being the legal obligations to be observed. The involvement of the main opposition party, the condition of the electoral machinery and the education of the electorates, are other substantial matters to address.

The powers–that–be ventures the constitutional referendum without due consideration to section 39 of the Constitution, giving scant regard and limited interpretations to the provisions; particularly section 39 (6) speaks to the required parliamentary procedures for the purposes and order of the referendum-poll. It is very apparent that the Government as well as the CRAC were not aware of any legislation pertinent to a referendum in Grenada, and/or were prepared to embark on the referendum without observing a Referendum Act; but most disgusting, they are bent on keeping the people in ignorance on the issue.

It is interesting and instructive then to learn from Senior Legal Counsel Robert Branch that the powers–that–be will have to “amend the Referendum Act” to carry the constitutional referendum. Mr Branch who is the Focal Point on the Reform Project was speaking in the weekly Post-Cabinet Press Briefing on 17 November 2015 along with Legal Affairs Minister Elvin Nimrod, on the 6 Referendum (amendment) Bills which were to have its first reading in Parliament on 4 December. Unfortunately though, none of the officials gave details or specifics as to why the amendment of the Act, neither did anyone express which of the section(s) of the Act to be amended. Again, questions arise as to whether or not the powers-that-be is aimed to manipulate the system to gain an unfair advantage in the referendum; already it has all the accesses and means in propelling the population for a Yes–vote.

The 1987 Referendum Act (CAP 279 of the 1990 Revised laws of Grenada) is a short law containing 13 ‘brief and direct’ sections. It is an Act to regulate the manner of holding a national referendum, but it has no regulations. Without seeking to address the necessary regulations, the powers-that-be instead wants to amend the Act, which can also be a complete rescission. The question though, which of the provision or section is to be modified or even deleted from the Act, to meet ‘narrow selfish objectives’? The people is offensively out of the mix with such ‘forceful’ decision on the Act.

Considering the present political climate and parliamentary configuration in the nation, then for the Government to achieve its deceitful goals, the most hindering part of the Act 36 of 1987 is section 7 which establishes a 3–member Referendum Commission of which two members must be appointed by the Governor-General upon consultation with the Prime Minister and the Leader of the Opposition, and the other member being the Supervisor of Elections as chairperson. Why must this section be amended, since the ‘meaning and treatment’ of terms in the constitution should be the same for the terms in its laws, and so this rule must apply also to the term Leader of the Opposition; any of such unprincipled action may just lead to a legal challenge to the constitutional referendum.

Indeed, this legal requirement for the Leader of the Opposition in a national referendum is another case of the importance of ensuring that there ought always to be an opposition in Parliament. However, a constitutional problem should not be solved by conveniently altering a primary legislation which ‘directly and strongly’ bears on having the solution. The fact is that, it has been ‘gross negligence’ of the Government not to appreciate and attend to this referendum issue in the past and it is now ‘reckless opportunism’ to attempt to amend Cap 279.  The article “Constitutional Reform or Legislative Reform?” was published in April 2013, making the point that within the context of a chaotic Legal System in which justice is inaccessible, Legal Reform must take precedence over Constitutional Reform, and expressing that it is unfortunate for the powers-that-be to focus on the CCJ (Caribbean Court of Justice) and not on local Legal Reform. (Also “Grenada Constitution Reform: The CCJ Issue”, which laments that the Regional Integration is made paramount over Good Government).

The importance of recognizing the role of an Opposition, as well as that of Civil Society, in ‘active and progressive’ democracy, is very evident by the postponement of the launch of the UNDP’s project to support the referendum on constitutional reform in Grenada, which was scheduled also for 4 December 2015. Although not knowing the exact reason for the postponement, the UNDP may have responded to the address made 2 days before the launching ceremony of the project, by the leader of the main opposition party; read “National Address by V. Nazim Burke, political leader of the National Democratic Congress (NDC) on the Grenada Constitution Reform Project.”

In fact, in his weekly articles, consultant to the Government on the Reform Project, Dr Joseph, indicates the likelihood of Grenada losing the financial support from the UNDP, due to non-cooperation of the NDC on the referendum; see “On the Road to Referendum” by Dr Lawrence A Joseph (Law Firm of Joseph & Joseph Attorneys-At-Law). It is of grave concern though, to realize how Consultant Joseph insinuates that the Government should find funds elsewhere, which most likely will be ‘unregulated monies’, to campaign and conduct the constitutional referendum.

In light of the pronouncement in the 2015 Throne Speech by Governor-General Dame Cécile La Grenade and followed in the 2016 National Budget by Prime Minister Dr Keith Mitchell, that the referendum will take place during the first half of the year 2016, it is ludicrous to be having so many different pieces of comprehensively ‘thought-provoking and far-reaching’ Bills to be ‘fully settled’ within this time-frame. Moreover, it is regrettable that the people have not been given the opportunity to acquaint themselves with White Papers on those Bills. It may be argued then that this situation is not in the true ‘spirit and letter’ of the 1974 Independence Constitution; particularly, it was never contemplated by the framers to have a multiplicity of referendum-related Bills debated simultaneously within the stipulated ninety days (section 39.5 of the Constitution).

Any constitutional referendum held in Grenada under the current circumstances would be very questionable. Apart from the distressing socio-economic conditions which are typified by a burden of austerity measures on the people, the people are also asked to focus on contributing to the formulation of a National Sustainable Development Plan. Now with the injection or addition of the Referendum Regulations Legislation at this ‘late stage’ to the Constitutional Referendum Amendment Bills, and at the same time having no avenue and timetable for ‘meaningful and sound’ debates amongst the people, spells dictatorship, marking Democracy as a mockery and the Constitution Reform as a farce. It must also never be missed that there is no official opposition in the Parliament and neither is there the approval of a professional non-partisan Panel to generate constructive, healthy and balanced views on the pertinent issues; review “Grenada Constitution Reform: Objectivity is Required.”

Vigilance is ever required now at this time, by every serious-minded person, in protesting NO to unconscionable acts for biased reasons. Pursue the Truth, Expose the Truth and Defend the Truth! 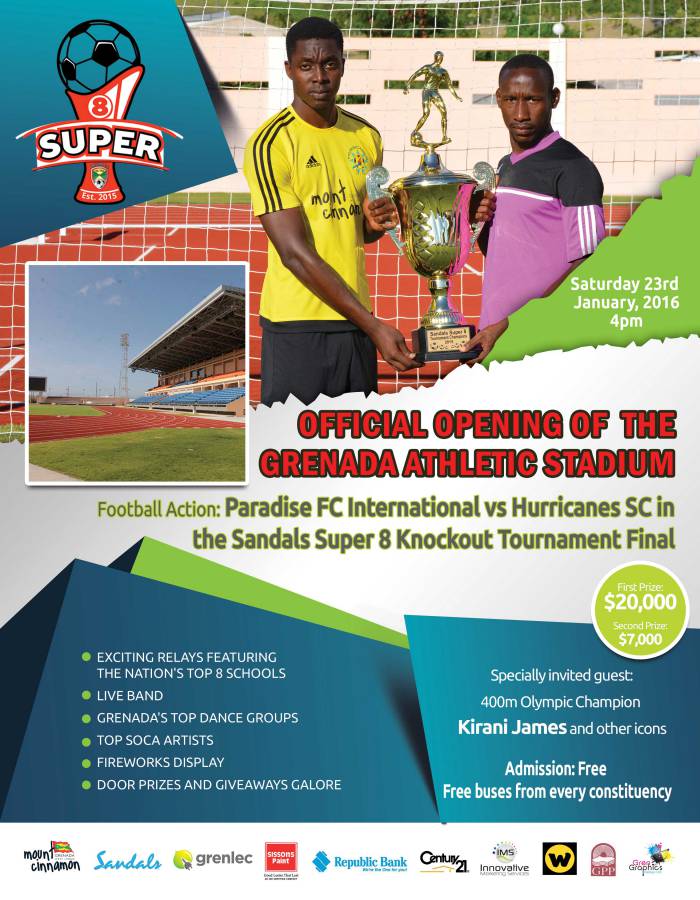