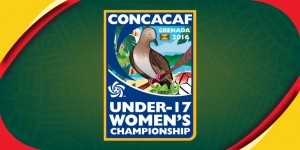 Schedule of CONCACAF Under-17 Women’s Championship

Schedule of CONCACAF Under-17 Women’s Championship

This story was posted 6 years ago
in Football
4 min. read

The Confederation of North, Central America and Caribbean Association Football (CONCACAF), conducted the draw for the CONCACAF Women’s Under-17 Championship Grenada 2016, at the Radisson Grenada Beach Resort Hotel in St George, Grenada.

The draw, which determined the groups and match schedules for the tournament that kicks off on 3 March in St George’s, was opened with a welcoming address from CONCACAF Vice President and Jamaican Football Federation President, Capt. Horace Burrell. The event was conducted with the assistance of former professional footballer and current BBC pundit Jason Roberts, as well as Grenada Tourism Authority Representative Ms Chrislyn Lashington.

The event, with the presence of the Hon. Emmalin Pierre, Grenada Minister for Youth, Sports & Religious Affairs; Sen. Winston Garraway, representative of the Prime Minister’s Office; and Mr Cheney Joseph, President of the Grenada Football Association, sorted the 8 qualified national teams into 2 groups of 4.

Grenada was drawn into Group A along with Guatemala, Canada and Haiti, while Group B will contain Mexico, Jamaica, USA and Costa Rica.

The 2 finalists and the third place match winner at the CONCACAF Women’s Under-17 Championship Grenada 2016 will qualify directly to the FIFA U-17 Women’s World Cup Jordan 2016.

*CONCACAF reserves the right to change the time and order of matches.

NOW Grenada is not responsible for the opinions, statements or media content presented by contributors. In case of abuse, click here to report.
Tags: 2016athleticschampionshipconcacafdrawfixturefootballschedulestadiumunder 17women
Next Post