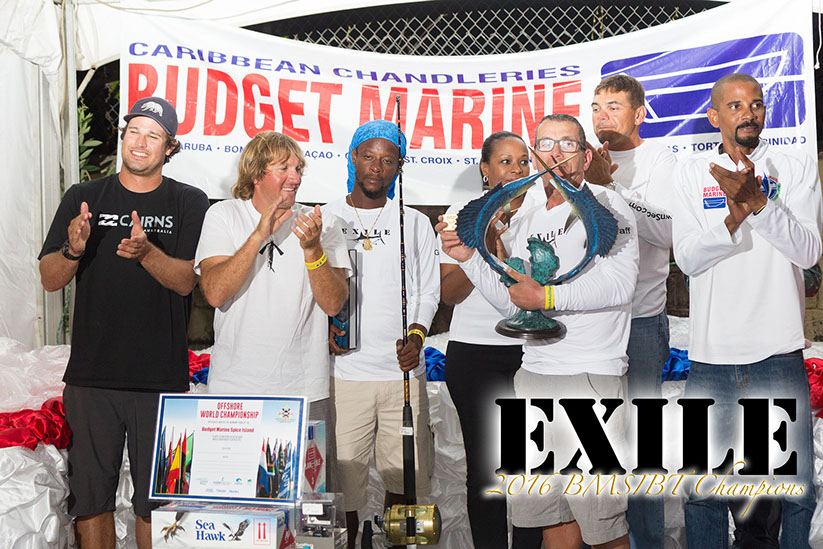 This story was posted 6 years ago
in Sports, Watersports
2 min. read

The Awards Dinner of the 2016 Budget Marine Spice Island Billfish Tournament (BMSIBT) brought the curtain down on the premier sport-fishing tournament of the Southern Caribbean, which took place in Grenada from 20 to 23 January. 50 boats representing 10 countries, with more than 250 anglers, experienced the explosive action of sport-fishing, and the warm and welcoming ambiance, which is characteristic of the Grenadian event. The 47th BMSIBT Champion was Team Exile from the United States, with a total of 6,600 points and 19 releases. They also went home with the Grand Slam prize of an AB Dingy and Motor, while their own Christopher Van Grieken copped the “Angler of the Tournament” prize with 2,600 points and 8 releases. Richard McIntyre, Chairman of the BMSIBT, described the recently-concluded tournament “as one of the best in the last 15 years.” Grenada he said, “always provides ample opportunity for an excellent fishing game, resulting in an exciting competition”. On behalf of the Committee, he expressed his sincere appreciation to all participants in the tournament and recognized in a special way, the many individuals who have supported of the tournament year after year. Billfishing enthusiasts described the SIBT as one of the best run tournaments in the region. Visiting teams were highly praise for the organisation and high standards that the Tournament has maintained over the years. Apart from the excellent competition, they look forward to being in Grenada to enjoy the hospitality and camaraderie of the event.

The BMSIBT Committee remains committed to the growth and development of the sport and tournament, and extends an invitation to all anglers to register early for the 2017 event.

NOW Grenada is not responsible for the opinions, statements or media content presented by contributors. In case of abuse, click here to report.
Tags: 2016billfishBMSIBTbudget marinechampionshipexilefishinggrenadasportstournament
Next Post

Several Persons Charged by the RGPF