This story was posted 5 years ago
in Business
3 min. read 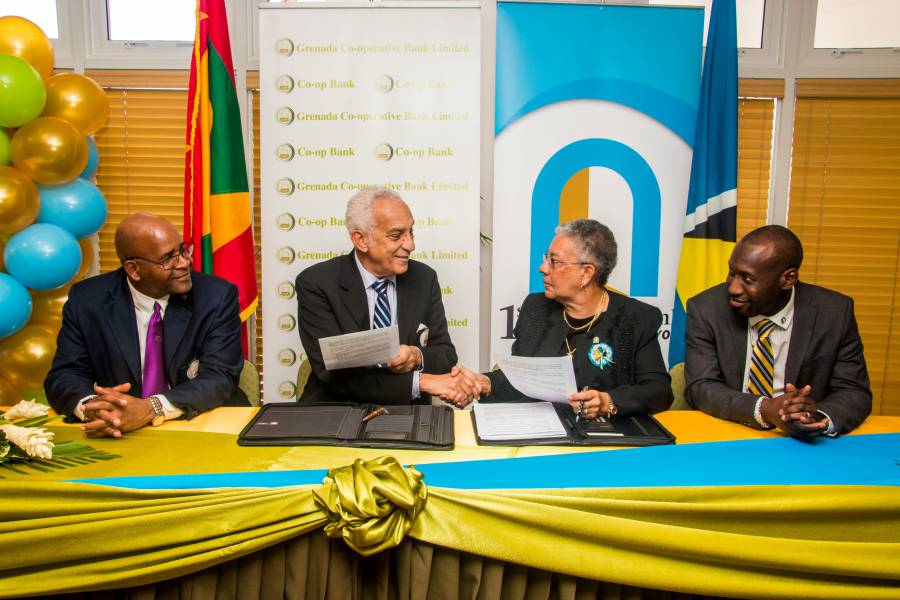 The cooperation agreement was announced at a Press Conference held at the Gordon V Steele Conference Room at the Grenada Co-operative Bank Limited, by the chairpersons of both banks.

Mr Derick Steele, Chairman of the Board of Co-op Bank, remarked, “We often described ourselves as like-minded banks, but this is not just a catchphrase. After Grenada Co-operative Bank was established in 1932, one of our founding fathers and the first General Manager, Sam Brathwaite, travelled to St Lucia to assist in the establishment of the St Lucia Co-operative Bank in 1937, which rebranded in 2004 as 1st National Bank St Lucia Limited. Our ties and connections run deep”.

He added, “This is a journey and an aspiration that commenced long before the birth of the OECS as an organized body of countries. Ours is a vision that moves quickly in the midst of regulatory changes, such as the Banking Act of 2015, to ensure that customers are well served and that shareholder returns remain consistent.”

Mr Steele’s sentiments were echoed by Dr Charmaine Gardner, Chairperson and President of 1st National Bank St Lucia Limited. She mentioned that “This collaboration seeks to emerge and ensure a stronger and more resilient entity. She informed the media that on Monday, 23 December 2013, both banks signed a Letter of Intent committing to pursue a path of collaboration towards enhanced growth, improved efficiency and profitability. She went on to say that after 2 years of in-depth study and analysis, that intent matured into a Memorandum of Understanding (MOU), which was signed on Monday, 28 December 2015. This MOU governs our processes of functional cooperation which we have dubbed our “Journey to Operational Efficiency.”

Under the MOU, the Banks will undertake several projects and initiatives; share technology and platforms designed to boost growth, share costs, drive profitability and improve efficiency.

The key projects include:

Dr Gardner spoke of the keen interest from neighboring banks, which was tangibly demonstrated by their presence at the press conference. She ended her statement by emphasizing that Co-op Bank and 1st National have commenced a journey to operational efficiency. The roadmap is designed to build stronger, more profitable Banks through growing our base of valuable, satisfied and loyal customers.

In addressing the conference, Hon. Oliver Joseph, Minister for Economic Development, Trade, Planning & Co-operatives highlighted that Government is extremely supportive and commend both banks for their vision and foresight. He continued by saying that the financial sector’s contribution averages 10% of GDP, and it is through collaborations such as these, that will ensure an even greater contribution is made to the economy.

Mrs Linda Felix-Berkeley, Resident Representative, Eastern Caribbean Central Bank Agency Office in her remarks stated that “the ECCB is supportive of Banks’ collaboration with the aim to improve growth, profitability and efficiency, and the reduction of cost overheads. This collaboration fits into ECCB’s encouragement of consolidation and scale maximization in the financial sector so that it will be a viable player in the economic transformation of our region.”

At the end of the remarks, questions from the media were addressed by the Managing Directors of both institutions; Mr Richard W Duncan of Co-op Bank and Mr Andy Delmar, 1st National Bank St Lucia Limited.