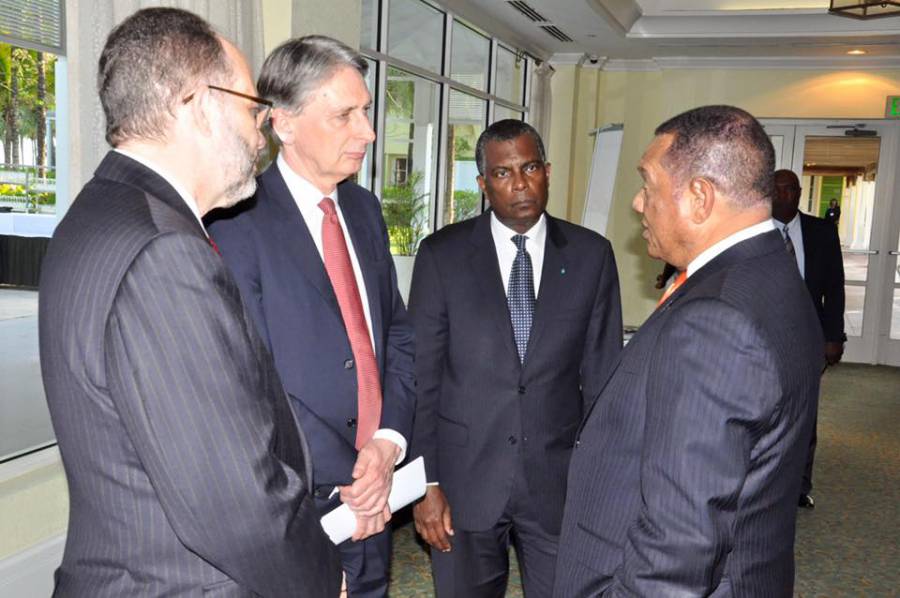 Prime Minister and Minister of Finance the Rt. Hon. Perry Christie (right) speaks to Secretary General of the Caribbean Community (Caricom) His Excellency Ambassador Irwin LaRocque (left), at the Official Opening Ceremony of the 9th UK Caribbean Forum, at Grand Lucayan resort, Freeport, Grand Bahama, as Secretary of State for Foreign and Commonwealth Affairs of the United Kingdom the Rt. Hon. Philip Hammond (second left) and Minister of Foreign Affairs and Immigration the Hon. Fred Mitchell looks on
Share

British Foreign Secretary, Philip Hammond, attended the 9th UK–Caribbean Ministerial Forum in The Bahamas 28 to 30 April 2016, for talks on trade and investment, security and justice reform and global challenges like climate change. He was accompanied by Minister for the Caribbean, James Duddridge.

The visit follows on from a series of activities recently carried out by the UK to support the Caribbean, including:

The visit was part of the Foreign Secretary’s Latin America tour, which included stops in Colombia and Cuba, and concluded in Mexico.


NOW Grenada is not responsible for the opinions, statements or media content presented by contributors. In case of abuse, click here to report.