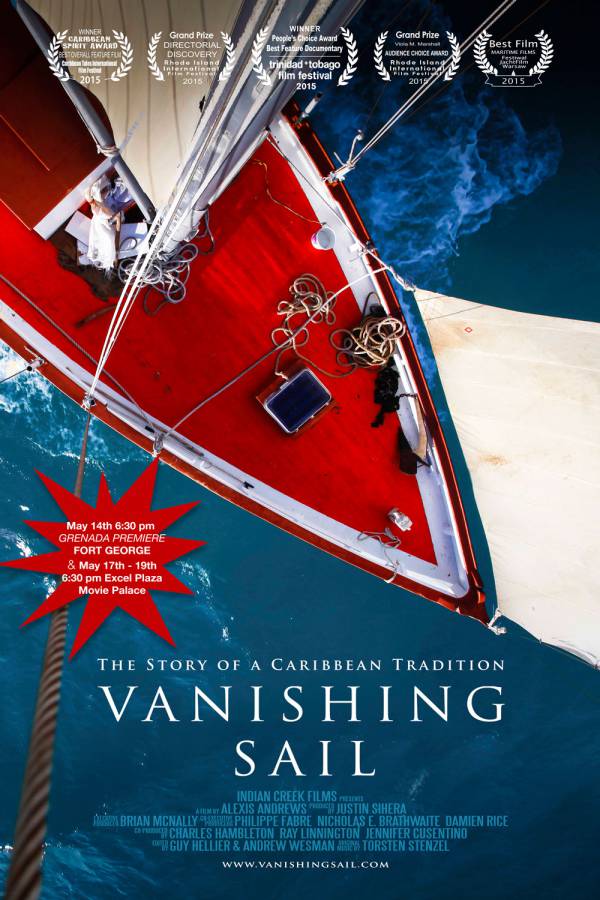 This story was posted 6 years ago
in Arts/Culture/Entertainment, PRESS RELEASE
2 min. read

On Saturday, 14 May at 6:30 pm, the independent documentary film Vanishing Sail launches its Grenada Premiere at Fort George overlooking the historic harbour of St George’s. This special heritage event opens a series of screenings culminating in a cinema run starting Tuesday, 17 May at Excel Plaza, Movie Palace.

Vanishing Sail has been selected by 14 film festivals in 11 countries winning 5 awards — described by prominent film industry news service Indiewire as “An insightful and poignant documentary that is part social history and part Herzogian portrait of resilience and determination in a far-flung locale.”
On the island of Carriacou, in the Eastern Caribbean, Alwyn Enoe is one of the last wooden boatbuilders practicing a trade passed down the generations from the original Scottish settlers that arrived more than two centuries ago.

He is approaching his 70s and with no more orders coming in, he decides to build one last sailing sloop with the hope that his sons will continue the trade. The film follows Alwyn’s progress and despair over 3 years — from hauling his trees out of the forest to a final traditional launching ceremony on the bayside. Stories of trading by sail and smuggling contraband from the freeport of St Barthélemy weave through the film like the currents of The Grenadines, told by some of the last old Caribbean seafarers.

With all the family’s hope & resources now in the wooden vessel, Alwyn decides to try and complete her in time to race in the Antigua Classics — 5 weeks & 300 miles away — here traditional West Indian and metropolitan elements fuse to create the final resolution of the film…

The film is part of a transmedia project representing fifteen years of research that includes a 2 volume photo essay, a unique archive of interviews with some of the greatest names in West Indies sailing, the building of five 42 ft traditional sailing vessels in Carriacou and an annual regatta on the island of St Barthélemy sponsored by UNESCO. Our wider goals are to inspire Caribbean education programs, coastal community and maritime heritage projects around the world.

NOW Grenada is not responsible for the opinions, statements or media content presented by contributors. In case of abuse, click here to report.
Tags: alwyn enoeartboatcarriacoufilmfort georgegismoviemovie palacepremierescreeningvanishing sail
Next Post

Do You Want Another American Revolution?