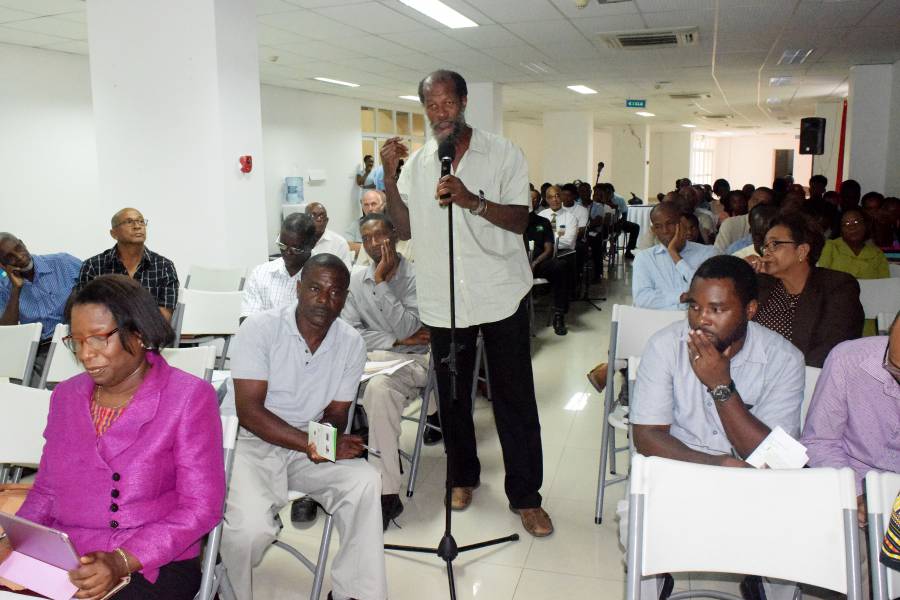 This story was posted 6 years ago
in Environment, PRESS RELEASE
6 min. read

“When people from diverse settings come together, great things happen.” This was the observation of the Director of the Commonwealth Foundation, Vijay Krishnarayan, as he made remarks at the conclusion of the National Policy Dialogue on Sustainable Energy, hosted by the Caribbean Consultative Working Group of the regional NGO Caribbean Policy Development Centre and its local affiliate, the Inter Agency Group of Development Organisations (IAGDO). The policy dialogue was held on Monday, 30 May, at the Grenada National Stadium.

Mr Krishnarayan noted that civil society organisations should have a say in how energy policy was made and noted the role of civil society organisations as a catalyst for bringing multiple stakeholders together. The importance of the involvement of civil society in policy dialogue on energy in the region was also articulated by Ms Niebert Blair, Project Officer responsible for Energy in the Caricom Secretariat and Mr Clyde Griffith, Executive Director of the Barbados Renewable Energy Association and first Energy Minister of Barbados.

Ms Blair, who gave a presentation on Caricom’s Energy Efficiency and Energy Conservation Initiatives, introduced the concept of Integrated Resource Planning and noted that it was important that the people of the region dictate how their resources should be used to work for them. Mr Griffith shared his experience of promoting renewable energy in Barbados and the successes that his organization have had to date in raising public awareness and encouraging the adoption of solar systems. Mr Griffith noted that the region was a price taker in respect of the international oil prices.

However, the region possessed abundant natural resources of wind and solar energy. The question was how to get civil society to be part of the effort to secure the energy independence of the region. He noted that there was need to “relate to the people who made decisions about our lives” and also noted that “advocacy was part of the political decision-making system”. He challenged participants to get involved in advocacy and in raising awareness on the issue of energy. He said that his organization looked forward to collaboration and co-operation with other organisations in the region on the issue of renewable energy development.

A presentation was also made by Mr John Auguste, Senior Energy Officer in the Department of Energy on Grenada’s initiatives re energy efficiency and energy conservation. Ms Sandra Ferguson of the Inter Agency Group of Development Organisations gave a presentation on the findings of a rapid scan of the public-policy context undertaken by the Consultative Working Group in June 2015. Ms Shantal Munro-Knight, Executive Director of the Caribbean Policy Development Centre gave opening remarks and introduced the objectives of the dialogue. Dr Spencer Thomas, Chairman of the Sustainable Development Council served as moderator.

Some 75 persons representing a broad cross section of interests and stakeholders, civil society, private sectors, labour, academia and students — participated in the National Policy Dialogue on Sustainable Energy. The objectives of the policy dialogue were to:

Among concerns and recommendations brought to the fore by participants were the following:

The National Policy Dialogue in Grenada was the fourth in a series of dialogues being held throughout the region by the Caribbean Consultative Working Group (CCWG) over the period 16 May to 1 June. The output of all of these dialogues will contribute to finalizing a regional civil society policy recommendation to be presented to Caricom and other regional institutions of governance later in the year.

The CCWG is a civil society mechanism established to enhance the participation of the regional civil society sector in policy development in the region. Its formation was facilitated by the Barbados-based NGO Caribbean Policy Development Centre (CPDC) through the support of the Commonwealth Foundation action Support to Caribbean Civil Society for Enhanced Participatory Governance. The Caribbean Policy Development Centre — a regional network of NGOs — currently serves as the CCWG Chair and Secretariat. Membership of the CCWG is comprised of both national and regional organisations, representing diverse sectors and based in 6 countries of the region — Guyana, Trinidad, Grenada, St Vincent & the Grenadines, St Lucia, Jamaica and Guyana. The Inter Agency Group of Development Organisations is a member of the CCWG.

NOW Grenada is not responsible for the opinions, statements or media content presented by contributors. In case of abuse, click here to report.
Tags: electricityenergygeothermaliagdongosolarsustainablesustainable energy
Next Post