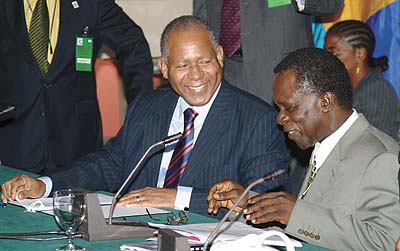 In a note to his family, Dr Mitchell describes his departed friend as a “charismatic leader, who loved people and promoted regional unity.”

The Grenadian leader also stated that he would never forget, how during one of his darkest moments as prime minister, his friend, Patrick Manning, then Prime Minister of Trinidad and Tobago, flew to Grenada by helicopter in 2004, a day after Hurricane Ivan ravaged the Island, to be by his side.

Prime Minister Manning assured the Grenadian leader that he was there to offer support and assistance more as a friend than as Prime Minister. Manning and the people of Trinidad and Tobago rallied behind Grenada during that most difficult period, and according to PM Mitchell, “we are forever grateful to them for being steadfast friends.”

We will miss this most benevolent gentleman, a visionary leader, and true friend.

May the soul of Patrick Augustus Manning rest in perfect peace.

NOW Grenada is not responsible for the opinions, statements or media content presented by contributors. In case of abuse, click here to report.
Tags: condolenceivankeith mitchellobituarypatrick manningprime ministertrinidad
Next Post