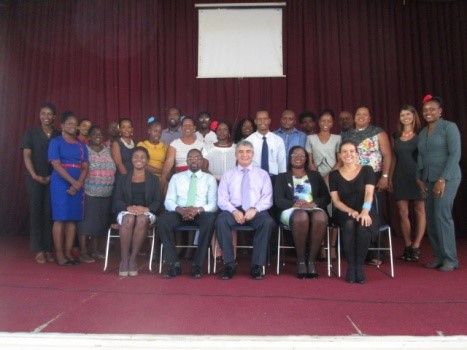 25 Public and Private Sector employees were recipients of Certificates of Merit from the Universidad Externado de Colombia (CEPEX).

Present at the ceremony were His Excellency Jaime Alberto Acosta Carvaja — Ambassador of Colombia to Grenada and Miss Laura Samiento Jimenez  — representative from CEPEX.

The Spanish programme, a collaborative initiative between the Governments of Colombia and Grenada, was coordinated by the Department of Public Administration, Prime Minister’s Ministry, and supported by the Ministries of Education and Foreign Affairs.

The participants, including Booth Attendants, Airport Security, Customer Service Staff and  Police, Immigration and Customs Officers, were part of the second phase of the programme, which commenced 7 March 2016. The first phase was held last September through to December with a total of 50 Public and Private Sector employees graduating from the course.

The overarching aim of the programme was to equip officers with the necessary skills to comprehend the Spanish language and to communicate efficiently with speakers of Spanish, with whom they regularly interact in the course of their routine duties.

In addition, teachers at the primary schools and lower secondary (Forms 1 to 3) were engaged in methodological approaches, especially in oral Spanish discourse that will elevate the teaching of Spanish.

A Spanish guide for the teaching of Spanish to Primary and Lower Secondary students was designed according to the Common European Framework of Reference for Language: Learning, Teaching Assessment (CEFR).

The programmes also encompassed a cultural element whereby the participants were able to experience and interact with the Spanish culture of the region.

The Department of Public Administration is elated over the success of the programme, since the aim of the Department is to access and deliver training among Public Officers to improve job performance and ultimately service delivery. Hence, the partnership with the Government of Colombia to deliver this training is another demonstration of our commitment to enhance the capacity of public officers in various disciplines.