This story was posted 5 years ago
in Environment
3 min. read 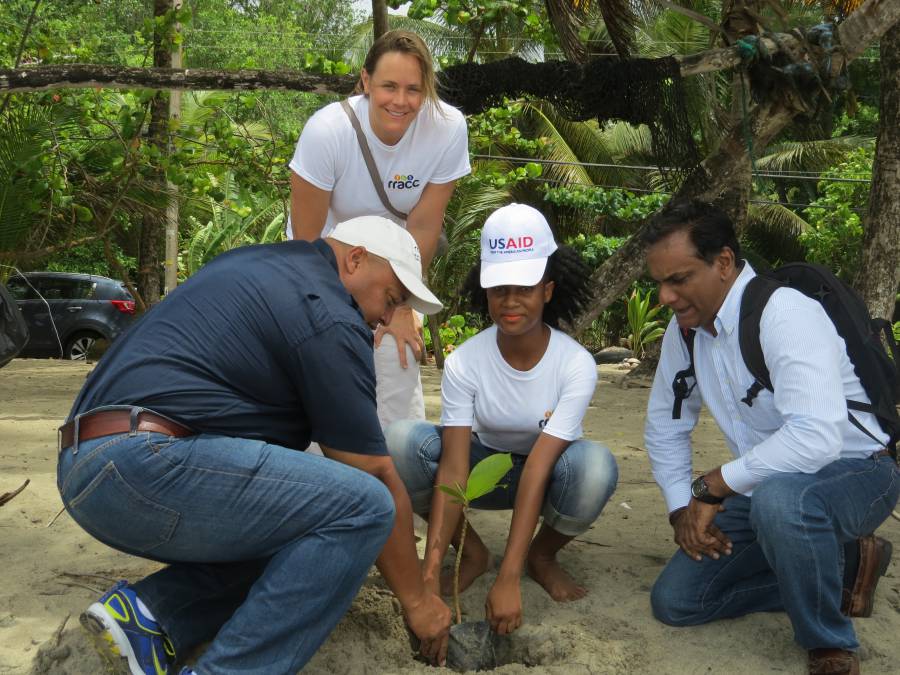 As part of a regional climate change initiative, the United States Government supported a major reforestation effort on the island of Grenada. Students from the Mac Donald College Secondary School, forestry officials, and members of the St Patrick’s Environmental Community Tourism Organization (SPECTO) planted over 100 trees on Mount Rodney Beach in Sauteurs to help to combat extensive coastal and land degradation.

“Plant a Tree, Adapt to Climate Change” was the theme of the Sauteurs Reforestation Exercise spearheaded by the United States Agency for International Development’s (USAID) — supported Rallying the Region to Action on Climate Change (RRACC) project in collaboration with Grenada’s Ministry of Agriculture, Land, Forestry, Fisheries and the Environment. Sauteurs was selected as the OECS project demonstration site to address issues of land and coastal management due to the high levels of land degradation in the area and ongoing efforts to foster forest maintenance and regeneration.

Prior to the tree planting, reforestation equipment and tools including forks, wood shredders, and water storage tanks were officially handed over to the Forestry Ministry to help enhance plant propagation at the Grand Etang Plant Nursery, another RRACC project site.

Addressing the brief hand–over ceremony, USAID’s Environmental Specialist, Joth Singh, said USAID was pleased to partner with the OECS and the Government of Grenada on this important climate change adaptation initiative. Indicating that Global Climate Change receives “front-line attention of the United States Government in terms of development assistance,” Dr Singh said the Agency was pleased with the success of the RRACC project and looked forward to future collaboration on projects aimed at bringing “significant benefits to the region.”

Environment Minister, Roland Bola, thanked USAID and the OECS for ensuring that the Government and citizens of Grenada received tangible benefits under the $9.5 million RRACC project, which formally ends next month. Minister Bola said his Government was aware of the destruction that sand mining is causing to the coastline and was moving towards “an absolute ban” on the practice. He added that within the next eight to fifteen months they would be embarking on public private partnerships to ban the importation of plastics, Styrofoam, and other potentially hazardous materials.

“While we are already feeling and seeing the effects of climate change — there are still a lot among us that are skeptics who still believe that it is something not yet happening. I believe that despite all the activities that we are engaged in that there is still the need for serious education to reach some of these people who are skeptical of climate change,” the Minister emphasized.

RRACC Project Coordinator, Lester Arnold, said the reforestation exercise was “both timely and critical” for Grenada given the extensive level of coastal erosion currently taking place in the Sauteurs Bay area. Citing evidence of land degradation stemming from deforestation and sea level rise, he emphasized that several other activities are included under the 5–year regional project, including a Rain Water Harvesting project at the Grand Etang Nursery and the installation of an agrometeorological station in Sauteurs to improve data collection.

Deeming the RRACC project as “very successful” throughout the OECS, Mr Arnold thanked the Government of Grenada and people of the United States for their continued support.