This story was posted 5 years ago
in Environment, PRESS RELEASE
2 min. read 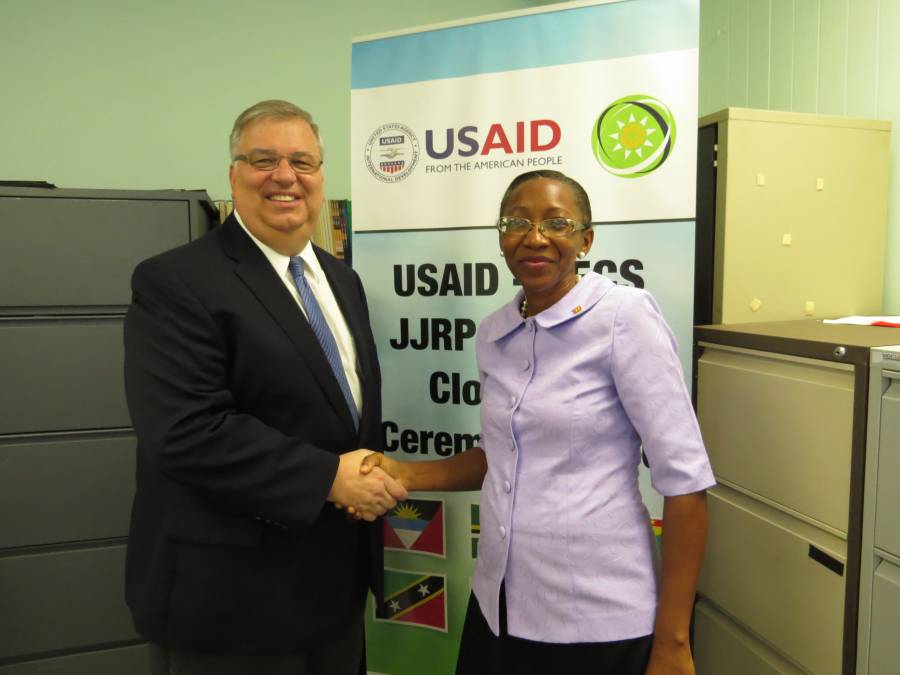 Charge D' Affaires with the U.S Embassy in Grenada, Steve Frahm, greets Merina Jessamy , Permanent Secretary with responsibility for Agriculture, Lands and the Environment during the RRACC ceremony.
Share

Grenada’s capacity to mitigate climate change risks stemming from storms, hurricanes, droughts and other extreme weather events has been enhanced by the 5-year, US$9.5 million Rallying the Region to Action on Climate Change (RRACC) project implemented by the United States Agency for International Development (USAID) in collaboration with the Organization of Eastern Caribbean States (OECS).

USAID Mission Director for the Eastern and Southern Caribbean Christopher Cushing officially closed out the Grenada segment of the project at a ceremony on Wednesday, 22 June. As part of the project, USAID provided $1.3 million in assistance to improve the country’s overall resilience and assist communities in reducing climate-related risks to their lives and livelihoods over the long term.

Under the RRACC initiative, and in response to concerns raised by residents about the impact of sea level rise, a seawall was built in Petite Martinique to buffer strong waves and mitigate coastline erosion during storms. An Integrated Watershed Rehabilitation and Coastal Area Management initiative in the Sauteurs community resulted in the development of a Community Climate Change Adaptation Plan, which focused on replanting trees in watersheds and along coastal areas eroded by wave action. The Sauteurs Reforestation Exercise included the planting of over 100 trees on the Mount Rodney Beach by students from the Mac Donald College Secondary School, the Ministry of Agriculture, Land, Forestry and Fisheries, and members of St Patrick’s Environmental Community Tourism Organization (SPECTO). The RRACC Project also enhanced the capacity of the Grenadian government’s forestry nursery in Grand Etang by providing tools and equipment, constructing nursery beds for plant propagation, and installing a rainwater harvesting system to ensure water availability during dry periods.

“As a result of these projects, Grenada’s capacity, knowledge base, and ability to adapt to and mitigate future climate risks (particularly for coastal communities) were significantly improved,” Mr Cushing said. “Sauteurs and Petite Martinique represent only two of the region’s many vulnerable communities, but can serve as models to demonstrate successful adaptation measures.”

Acknowledging Grenada’s economic dependence on coastal resources like mangroves, sandy beaches, sea grasses and coral reefs—all of which are particularly vulnerable to climate-related threats like sea level rise, changing temperatures and increased salinity—Mr Cushing noted that the project was a positive example of the strides that can be made when governments and ordinary citizens work together to bring about positive change. “This project also underscores the US Government’s strong commitment to helping Grenada and the broader region to adapt to more frequent and severe storm events, periods of drought, and other impacts of climate change,” Mr Cushing said.