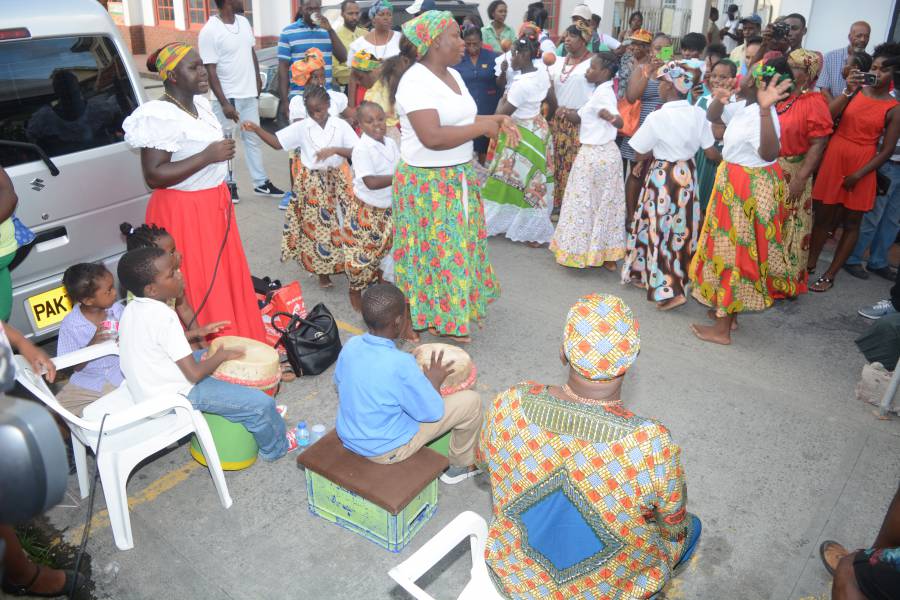 250–year Reunion of the Temnes in Carriacou

250–year Reunion of the Temnes in Carriacou

This story was posted 5 years ago
in Arts/Culture/Entertainment, Feature
3 min. read

The Sierra Leone kinfolk arrived in Carriacou on Tuesday, 27 September 2016, and they were met with the sound of drums, singing and the traditional Big Drum Dance to mark the significance of this historic event. Also present to greet the visiting Temnes were children in their school uniforms and other members of the public who were adorned in their African wear.

According to Grenadian Historian John Angus Martin, the survival of the Temne descent is only celebrated in Carriacou through the Big Drum Dance. This, he said, is rather unique as the Temnes are a small tribe/ethnic group in Sierra Leone, and the possibility of them surviving over 200 years on a small Caribbean island is almost impossible.

During the visit to Carriacou, the Temnes visited a one–room museum with historical artifacts and other cultural memorabilia, including a statue of the Paramount Chief Bai Bureh.

The occasion was also used to launched a book, ‘The Temne Nation of Carriacou: Sierra Leone’s Lost Family in the Caribbean’ which was authored by Joseph Opala, Cynthia Schmidt, and Grenada’s John Angus Martin. The book looks at the origin of the Temnes in Grenada via the Slave Trade in the late 1700s and the direct connections to Bunce Island in the Sierra Leone River.

For the 3 days of activities, the visiting kinfolk and the native Temne members engaged in the cultural exchange of food, music and other artifacts. A number of places were visited, including the Tourism Welcome Centre, and the Historical Society where there were presentations of drums, pictures, and books. Visits were made to the communities of Mt Pleasant and Grand Bay — the two communities with the highest concentration of Temne roots.

Senator Hood, Minister Tunis, and Chief Bureh all spoke about the emotional nature of the reunion and the excitement of the reconnection. Minister Tunis, in his speech noted that what was experienced in Carriacou, was much deeper than what they were expecting — testimony to a very strong tie between Carriacou and Sierre Leone.

On a website dedicated to the Temne Tribe’s reconnection, http://www.africonnections.com/long-lost-family, it was stated that as far as they know “no family reconnection quite this specific has ever happened in the Caribbean before.” The site praised the island of Carriacou, which they claimed has preserved the memories of their African roots and elements of their African culture.

Although the folklorists in Sierra Leone were aware of their ancestral connections in Carriacou since the 1950s, it wasn not until 2011 when three scholars, one of whom was Mr Angus Martin, visited the small island, where the descents expressed their eagerness to reconnect with their kinfolk.

The main purpose of this historic visit was to celebrate the direct connections between Carriacou and Sierre Leone.

Unfortunately, due to the inclement weather, the planned trip to Petite Martinique was cancelled.

It was revealed by Minister Tunis that plans would be put in place for the Temne people of Carriacou and Petite Martinique to visit Sierra Leone in 2017.

NOW Grenada is not responsible for the opinions, statements or media content presented by contributors. In case of abuse, click here to report.
Tags: africabig drumbrenda hoodcaribbeancarriacouculturedonella hostenhistoryjohn angus martinsierra leonetemnetourism
Next Post