Is there anything in the Referendum for the Little Man?

Is there anything in the Referendum for the Little Man?

About a week or so ago at the request of the Saint Andrew’s Development Organization (SADO) I participated in a public education exercise on the referendum process. This exercise took place in the village of La Fillette in the parish of Saint Andrew near to a now defunct night club which was known as “The Frying Pan”. After that outdoor conversation was held someone asked me a most fundamental and far reaching question: “Is there anything in the referendum for the little man?” There and then I informed the inquirer that both the Rights and Freedoms Bill and the Caribbean Court of Justice Bill are the main Bills which would be directly beneficial to the “little man”. There is no doubt however that the other referendum Bills would also affect the ordinary person, indirectly.

The Rights and Freedoms Bill entrenches the provision that all persons, whether born in or out of wedlock are born equal, have equal status and are entitled to equal rights. This means that if a man dies without leaving a will and had some children with a wife and some with a person or persons other than his wife, then his wife would be entitled to half of his property and all of his children would be entitled to the other half in equal shares. However the deceased would have been entitled to leave property to anybody he chooses in a will. Whilst the Status of Children Act provides for the equal treatment of children who were born in or out of wedlock, this law could be changed at any time by Parliament. However when its provisions are entrenched in the Constitution it would take an additional two-thirds of the electorate support in a referendum to change them.

The Rights Bill also provides that children in general under the age of 16 years and children with disabilities under the age of 18 years have a right to have their school fees and other related fees paid by the state once they attend educational institutions which are owned or funded by the state. Once approved, these provisions would be enforceable and would not be subject to change unless approved by the requisite majority in a referendum. No one can reasonably argue that these provisions would not be beneficial to the “little man”.

Whilst the original constitutional provisions catered only for non-discrimination by way of race, place of origin, political opinions, colour, creed or sex, the proposed changes cater for much more: “colour, creed, disability, ethnicity, language, place of birth, national or social origin, political opinions, race, religion, sex or social class”. The gender equality section of the Rights Bill makes it clear that both men and women must be entitled to equal rights and status in all spheres of life, especially in economic, educational, political, civic and social activities. These non-discriminatory clauses go across the board and it is submitted that they would be more beneficial to ordinary folks than to people of affluence.

Only recently a past school mate of mine approached me to find out how he could go about protecting his paintings from being unlawfully used by individuals. He has incorporated several of his paintings in a book. The Copyright Act of 2011 gives such protection to him as he has been clearly identified as being the author of the book. However the law could be changed easily. The proposed constitutional amendments, once approved, cannot be so easily changed. The Human Rights Bill makes it clear that every person shall have the right to enjoy intellectual property rights and that the state has the obligation to support, promote and protect those rights.

New proposals in the Rights Bill also provide that if a person is arrested or detained, he has a right to be informed without delay at the time of his or her arrest or detention, of the reason or reasons for his or her arrest or detention and to have the right to communicate with a lawyer of his or her choice. The present Constitution does not make such provisions. The Bill which proposes to have the CCJ as the final court of appeal for Grenada instead of the Privy Council may also be considered to be directly beneficial to the ordinary person. This is so as the CCJ is definitely more accessible and more affordable to these ordinary folks than the Privy Council.

Altogether the seven referendum Bills seek to improve fundamental rights and freedoms of individuals, guarantee gender equality, make special provisions for people with disabilities, improve the electoral process, curtail the power of a Prime Minister and government, seek to minimize corruption, enable final appeals from the courts to be more accessible and less costly, and engender a spirit of nationalism, among other things. It may be concluded therefore that all of the above would be significantly beneficial to the “little man” both directly and indirectly.

NOW Grenada is not responsible for the opinions, statements or media content presented by contributors. In case of abuse, click here to report.
Tags: arrestbillccjconstitutioncopyrightcracdisabilitydiscriminationeducationequalityfreedomgenderjusticelawrence josephprivy councilreferendumrightrightssadoschool
Next Post 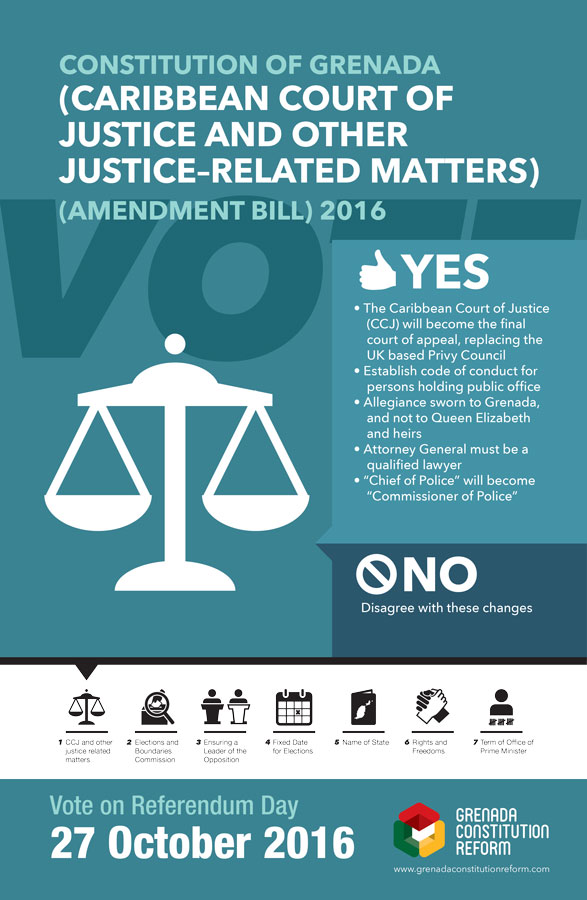 Caribbean Court of Justice and other Justice-related matters