On 10 October 2016, The Alliance of Evangelical Churches Inc. Grenada released a press statement denouncing their support for the Rights and Freedoms (Amendment) Bill and encouraging their congregation to vote ‘No’ against the Bill on Referendum Day. Some of their members have been busy on social media ranting and raving, overcome by the Holy Spirit because nothing else could explain their fanatic behaviour. Their only concern is a fear that there is a loophole that would give homosexuals in Grenada the right to marriage equality, which is against the traditional gender roles they seek to uphold.

Quite frankly, this obsession with marriage equality is bemusing, and a sad attempt by religious figures in Grenada to stay relevant in the 21st century. Homosexuals in Grenada have far more pressing concerns: stigma and discrimination, crime and violence, housing, poverty, employment, lack of job security, access to health care services, opportunities for higher education, mental health, domestic issues with family, etc.

Amidst all the social ills in our society, the AEC has failed to ban together so desperately to seek attention. We have to ask, why? The behaviour of the AEC must be called out — it is discriminatory and does nothing more than fuel crime and violence against an already marginalised community.

One has to demand, where was the public statement calling for Due Process of Law when Oscar Bartholomew was brutally murdered in 2011? And we are not referring to the protest outside the police station that saw no substantial gains. Need we remind the public that two lives were lost following this tragedy. May the soul of Oscar’s Mother, Adrianna Bartholomew, also rest in eternal peace.

Where is the public statement denouncing sexual-related offences, which seem to be clogging the judicial system? Between 2011 to July 2016 the Criminal Records Office has reported 1,193 such cases. Annually, 203 Grenadians can expect to be sexually assaulted. The lives of women and children surely do not matter to the AEC because of their silence on this burning issue. Yet they are outraged by the activities of consenting adults. The irony has us perplexed.

Where was the public statement denouncing sexual harassment in the National Lotteries Authority scandal?

Where was the public statement against bullying in the public school system when Alex Gabriel was brutally stabbed to death?

Where is the public statement denouncing stigma and discrimination against our disabled community, persons living with HIV, and adolescent mothers?

Of course, we should not expect a public statement on these matters, because the AEC is too busy obsessing over the affairs of consenting adults, and in their spare time interpreting scriptures to leverage yet another one of their fixations policing the morality, not of their membership, but the population at large.

Even a blind man could see that traditional gender roles are the reason we have a problem with domestic violence in our society. A deaf man could hear the cries of those victimised and a cripple could tell you how difficult it is to access justice for sexual offences. Yet, the able-bodied members of the AEC cannot see, hear or know these things. A fine example of the pedestal they sit on, privileged, high and mighty. Watching international news of LGBT persons fighting for their rights in their own countries, and postulating about what homosexuals in Grenada want. Ill-informed and far removed from the issues on the ground.

Grenadians, as far as our organisation is concerned, our country is a democratic state. No leader, or organisation can dictate your vote! Who have ears let them hear, and who have eyes let them see on Referendum Day it is you alone with your ballot. Whether you vote yes or no is your business.

Now back to our business. GrenCHAP is a safe space for learning about healthy intimate practices, sexual identity and human rights. We also provide resources for safer sex practices: brochures, male and female condoms, water-based lubricants, dental dams and pre and post HIV test counselling services. We welcome all LGBT persons and allies. Confidentiality is our promise. Our doors will still be open after Referendum Day!

NOW Grenada is not responsible for the opinions, statements or media content presented by contributors. In case of abuse, click here to report.
Tags: aecalliance of evangelical churchesamendmentbillchurchconstitutiondisableddomestic violenceevangelicalgendergrenchaphomosexuallgbtreferendumRights and Freedomswomen
Next Post 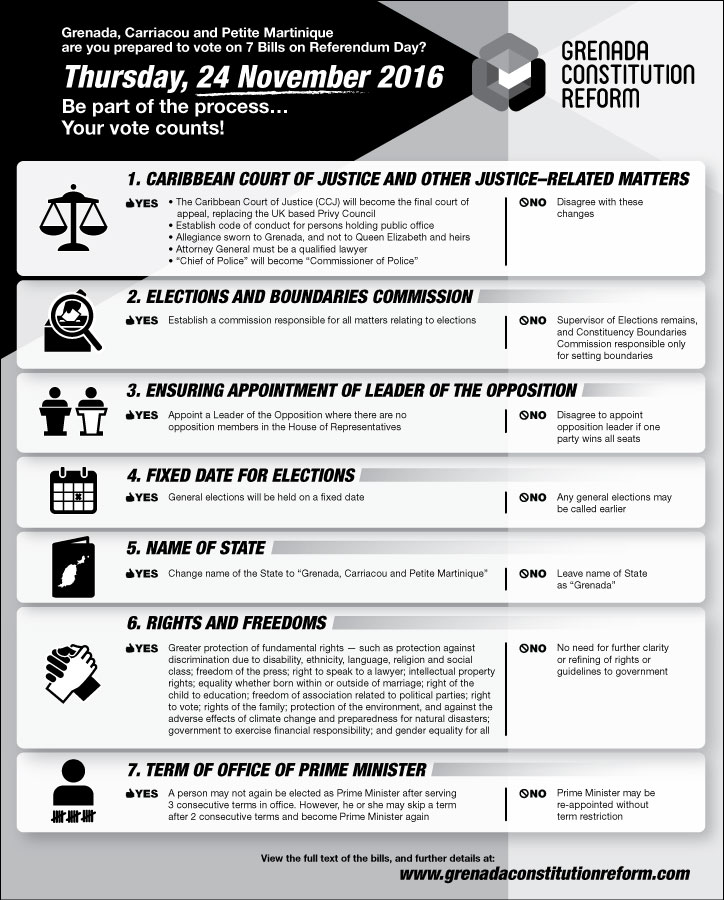