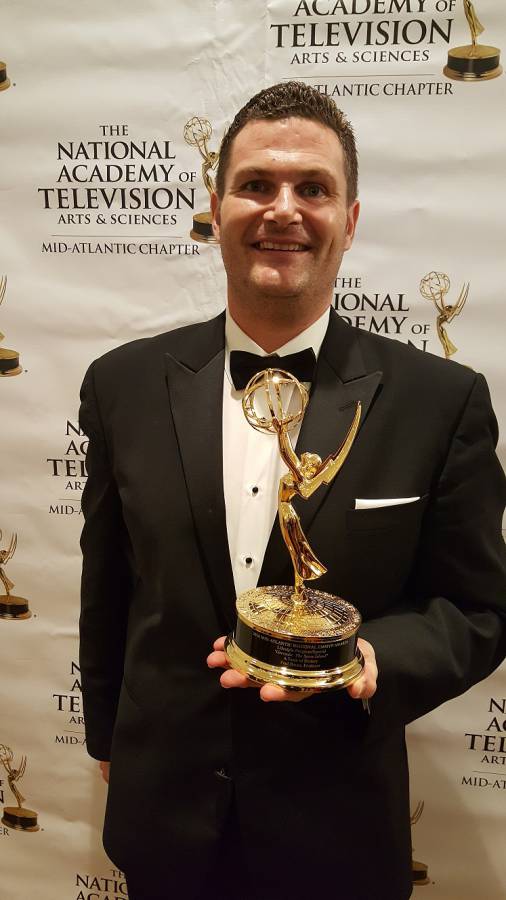 This story was posted 6 years ago
in Arts/Culture/Entertainment, PRESS RELEASE
3 min. read

Paul Bauer, Group Manager, Food and Beverage Standards, at Sandals Resorts International is a picture of pride after receiving an Emmy Award for his role as Producer of the television series, A Taste of History.
Share

The episode was called “Grenada: Island of Spice”, and was part of the “A Taste of History” series which airs in the United States on PBS and RLTV. In the award-winning episode, Mr Bauer highlighted the history of authentic Grenadian cuisine, for which he was awarded Outstanding Lifestyle Programme/Special at the Emmy awards ceremony held at the Philadelphia Marriott Downtown on 24 September 2016.

Bauer’s role as Producer of the episode made him responsible for overseeing all logistics including identifying and securing filming locations, arranging interviews, sourcing ingredients and equipment and determining the stories to be told.

The award-winning episode aired during season 7 of the show, and is the tenth Emmy for the series which first aired in 2008, but the first for Bauer. Mr Bauer joined the Sandals team in 2009 after working with acclaimed chef, Sandals’ Culinary Ambassador and A Taste of History Host, Walter Staib.

A Taste of History is a half-hour show, sponsored by Sandals and based on the City Tavern Cookbook: Recipes from the Birthplace of American Cuisine, authored by Staib and written by Bauer.  The show travels the globe to various historical locations, telling the unique story of American culinary heritage and its many influences by recreating dishes inspired by the founding fathers.

The show has filmed in several other Caribbean islands including Jamaica, St Lucia, The Bahamas and the Turks and Caicos Islands, showcasing the local cuisine of each island and tracing the historical influences.

Bauer explained that there are many culinary parallels between island cuisine and eighteenth century American fare.  “The show has celebrated the many unique culinary experiences of the Caribbean which are also shared by the United States”, he said. “Both regions have a common culinary history with the British and French and this is reflected in the many similarities between Caribbean and colonial American cuisines.”

Thrilled by the win, Bauer said the award was not only his but belonged to the entire Taste of History and Sandals teams. “This award is as much for the Food and Beverage staff at Sandals who helped us bring this story to life, as it is for the Taste of History team. We could not possibly have done it without them. As Walter always says, one person may come up with an idea but it takes a team to execute,” Bauer said.

Peter Fraser, General Manager for Sandals LaSource Grenada applauded the win, “We in Grenada are very proud to be associated with this cultural documentary depicting the abundance of natural herbs and spices in Grenada, especially nutmeg and mace known the world over for its culinary and medicinal values. The episode even showcases the national dish ‘Oil Down’ and provokes the taste buds and lifts the spirits. Mother Nature has truly blessed this island with an abundance of goodness. Additionally we will like to thank Chef Aproniano Agad (Sandals LaSource Executive Sous Chef), Thaman Modeste (Local Cook), John Angus Martin (Historian), Daniel Sinclair (Nutmeg Farmer), Andre Garvey (Culture Aficionado), and everyone who was featured on the show or contributed in some way.”

The show’s upcoming season which will begin airing in June 2017 will showcase the history of Jamaica’s Maroons and their important role in creating Jamaican jerk cuisine, with a special episode filmed in Accompong, St Elizabeth, Jamaica.

NOW Grenada is not responsible for the opinions, statements or media content presented by contributors. In case of abuse, click here to report.
Tags: a taste of historyawardbeverageemmyfoodoil downpaul bauersandalstv show
Next Post