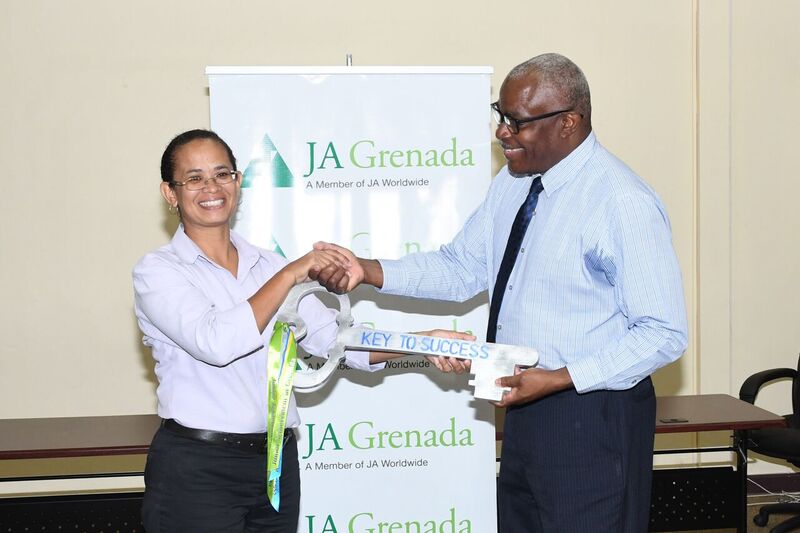 This story was posted 6 years ago
in Business, PRESS RELEASE, Youth
1 min. read

Only a few short weeks into the new school term, the 2016–2017 Junior Achievement Programme (JA) has commenced.

Historic contributor to JA since 1986 — when the programme was first introduced in Grenada — Grenlec has once again confirmed its support towards the initiative. This year, Grenlec has increased its support to $30,000 making the Company a major sponsor of the 2016–2017 programme.

Accepting on behalf of the Junior Achievement Board, Bernard Antoine, Chairman stated, “This is a very generous gift from Grenlec. Grenlec has been a long time supporter of the Programme and it is heartening that, after all these years, we can still rely on their support.”

Additionally, Grenlec team members Karel Hood and Janelle Lyons have been volunteering as consultants to student companies for several years. Ms Hood and Ms Lyons have both been recipients of the ‘Consultant of the Year’ award in 2015 and 2016 respectively.

Students enrolled in the Junior Achievement programme learn key business concepts such as marketing and sales, gain experience in operating a business and working as part of a team.

Junior Achievement Grenada extends appreciation to its major sponsors for 2016–2017, St George’s University and Grenlec; as well as other organisations for their continued contribution to the success of the programme.

NOW Grenada is not responsible for the opinions, statements or media content presented by contributors. In case of abuse, click here to report.
Tags: grenlecjaJunior Achievementsponsor
Next Post

Privy Council versus the CCJ