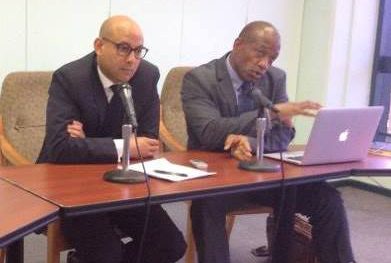 No Loophole for Gay Marriage in Rights and Freedoms Bill

No Loophole for Gay Marriage in Rights and Freedoms Bill

Attorney–General Cajeton Hood said on Tuesday, that the proposed amendments in the Rights and Freedoms Bill up for approval on Referendum Day, will not be creating a loophole that can result in Grenada legalising same sex unions.

Gender equality, according to the Bill, provides entitlement for both men and women to equal rights and status in all spheres of life, especially in economic, educational, political, civic and social activities.

“This therefore goes to the heart of the matter of the intention of the Bill — the intent is equal rights for both men and women, and not one having more rights than the other,” he said, while stressing that Government will not in any way go down the gay marriage route — but any lawyer can build any case using any law, including the current Constitution without amendments.

Urging the general public to inform themselves with the facts of the issues, he said they should not listen to ‘rum shop talk’. Recently, a group of church leaders have begun campaigning against the Bill, saying that despite its good intentions, it creates a loophole for gay marriage.

Hood further explained that Grenada’s marriage act has not changed, and there is no proposal to change it. “The amendment doesn’t speak to marriage,” he said.

Junior Education Minister Simon Stiell, reiterated that “there is no intent to weaken any provision… the Bill speaks to equal opportunity. It does not speak to same sex marriage.” He reminded journalists that Prime Minister Dr Keith Mitchell has openly said he is not in support of same sex unions.

The Rights and Freedoms Bill is one of the seven bills that will be up for voting on Referendum Day — 27 October 2016. The Bill will need a two-thirds majority for it to gain approval of the people.

Hood said that as a country, he trusts that the voting population sees the opportunity that is presented to play an important role in having a saying in the supreme law of the land. “It’s the first time the people are having a say and no politician can do it. It now up to people,” he said.

NOW Grenada is not responsible for the opinions, statements or media content presented by contributors. In case of abuse, click here to report.
Tags: amendmentconstitutionlinda strakerreferendumrights & freedom billsame sexsimon stiell
Next Post

Taxes Due for October