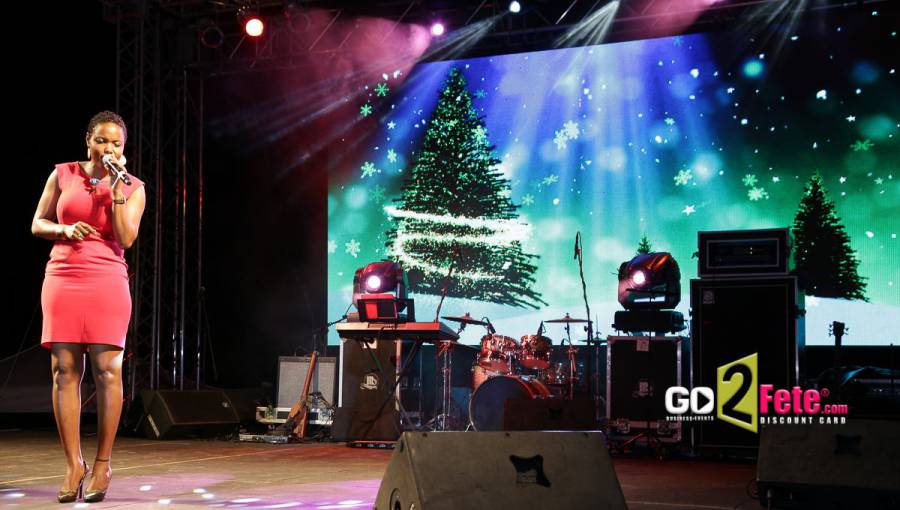 The stage is set! Well, almost literally, for the 8th annual Carols by Candlelight by the Rotary Club of Grenada. Sunday, 4 December from 4 pm to 10 pm will see the kick-off of the Season with Quarantine Point (Rotary’s Park) being transformed into a Christmas wonderland of lights, musical performances with dance, carols sing-along and a uniquely delightful array of food and drinks.

Dubbed a family event, the afternoon will feature a Grotto where Santa will be seated from 4 pm to 6 pm for family and individual photos with patrons. Santa will also give away 1,000 gifts! There will also be face painting and temporary tattoos as well as S’mores bonfire at sunset. Moko jumbie and Santa look-alikes would also roam the park showing off their tricks and posing for photo opportunities with kids from 1 to 92.

A former president of the Club and Chairman of the Carols by Candlelight 2016 committee says he is excited about the 2–hour concert produced by award-winning producer Richardo Keens–Douglas. “Some of Grenada’s best and best-known singers will be on stage, backed by one of the country’s top bands to deliver a Motown Christmas concert after sunset.” I have seen them at rehearsal. They are working so hard and well together to give the audience a time of their lives. The concert will be in 2 acts, between which there will be carol sing-along by the audience holding their sponsored flameless candles.

All this would be set in the centre of the Rotary’s Monica Benoit Christmas Park, a section of the Point decorated with a lighting spectacular donated by the Benoit family, famous for their displays at Christmas near the Grand Anse roundabout.

With the increased number of patrons expected in the Park this year for the event, the organisers are beefing up their logistics on traffic and parking arrangements. “Much of the Rotary Park will be taken up by the displays and vendor services. So we have introduced a park–and–ride system from Morne Rouge to efficiently shuttle our patrons in during the afternoon, and out again when the event has ended or as patrons wish to leave,” says past president John Williams, heading that team.

The current president of the Club, Gloria Williams has expressed her amazement and appreciation at how corporate sponsors, volunteers, musicians and others have joined Rotarians in giving freely and willingly of their time and resources for this worthy cause. “Just, for example, we even have volunteer bus owners and drivers who are giving up their Sunday afternoon to provide free shuttle services between the venue and Morne Rouge. All of this is for the charities we support during the year such as {you have the list}”

Tickets are only $25 for adults and $5 for children 16 years and under, at Grenadian Optical in St George’s and Spiceland Mall; Gittens Pharmacy, Grand Anse; online at www.rotarygrenada.org/cbc; and from Rotarians.

No food and drink will be allowed into the park, but blankets and chairs are welcome.