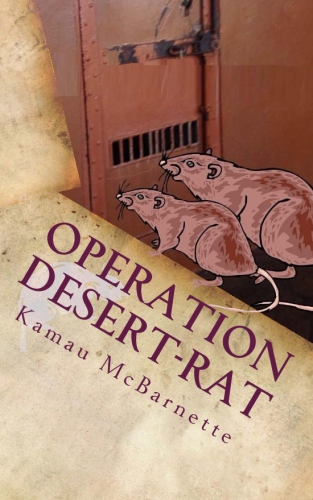 This witty docu-drama operates at several levels. There are the large, highly resourceful rats which inhabit Richmond Hill Prison in Grenada, West Indies. They engage in fierce, nightly battles for the food of the 17 surviving leaders of the Grenada Revolution, now badly treated and semi-starved prisoners of the United States’ military forces in occupation of Grenada following President Reagan’s invasion of the country in October 1983.

The leader of each of the “squads” of rats, rats who luxuriate in humouring others, adopts the name of one of the Caribbean Prime Ministers who collaborated with Reagan in the invasion. Vivid descriptions of the rats’ personalities and biographies of these Caribbean leaders are cleverly woven into the story throughout, as are the suspense-filled plans and detailed preparations of both the rats and the Grenadian political prisoners for each night’s battle for the latter’s dwindling food supply.

Operation Desert-Rat is the ultimate battle that pitted the cunning and determination of rats against the survivability of prisoners. Find out then, what a well-trained and determined army of rats, like any modern day army, can do to a group of beleaguered prisoners.

Operation Desert-Rat, capturing a slice of the life of the author and his colleagues during 26 years of incarceration, is a memorable and highly entertaining follow-up to McBarnette’s best-selling My Mother And I: The Epic Story of Grenada.

Available at Amazon online US and UK, in Kindle Edition and Paperback.

How far can a court rely on decisions outside of its jurisdiction?