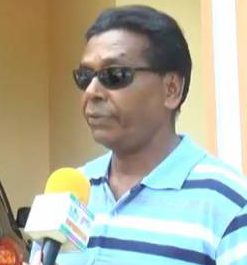 A St Mark family of 4 has had their properties destroyed during the early hours of Tuesday morning.

Kelly Gangadeen, of La Source, St Mark, reported a horrific incident which took place at his home, where he has resided for about 30 years. He said at approximately 5:30 am on 3 January 2017, he heard his dogs barking and upon looking outside, he saw a man destroying his gate. Gangadeen said he called out to the man, who responded with obscenities before leaving the compound.

Some of the damages to the Gangadeen’s property include smashed windows and windscreens of the family’s 3 vehicles, as well as extensive damage inside the house.

Prior to this unfortunate incident, Mr Gangadeen said he saw the accused with 2 cutlasses shouting “I killing all of them,” before jumping over the family’s wall. Gangadeen said he then informed his wife that they were in danger and sought to get his family to safety. According to Mr Gangadeen, “I cannot say what would have caused that because I have no problem with the gentleman.” He said he is now trying to calm his family down, as this has had an effect on them. Gangadeen’s 12-year-old son, who has been traumatized by the incident, said, he is not coming back to the house.

NOW Grenada is not responsible for the opinions, statements or media content presented by contributors. In case of abuse, click here to report.
Tags: donella hostenkelly gangadeenla sourcest markvandalise
Next Post