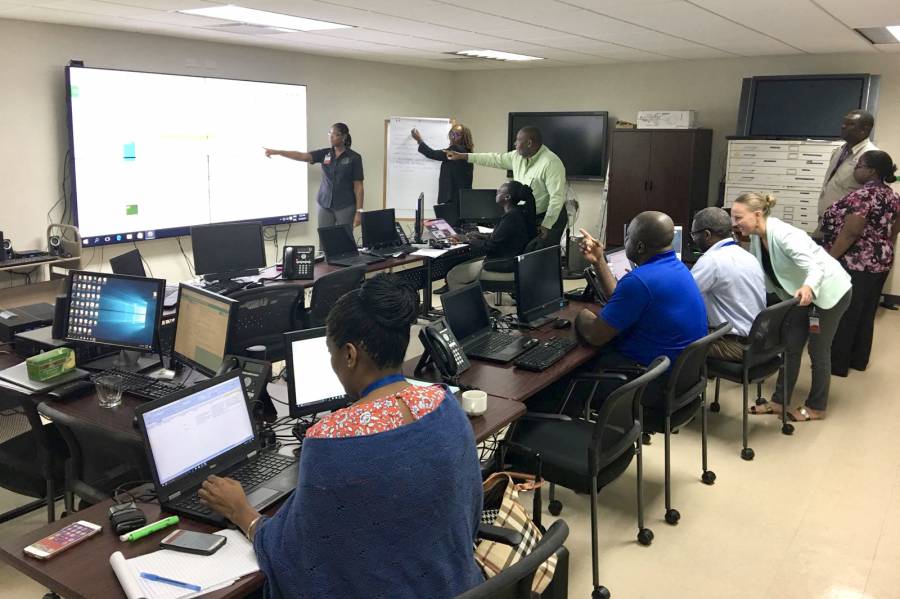 Representatives of four key Caribbean regional agencies successfully completed an intensive 2-day simulation exercise dubbed ‘Synergy 2017’. The exercise was held on 11 & 12 January 2017 and was hosted by the Caribbean Disaster Emergency Management Agency (CDEMA) based in Barbados.

The scenario involved the outbreak of a mysterious virus onboard a cruise ship as it approaches a Caribbean port. This is followed by an explosion, which contaminates water supplies and causes power loss. Rapid response teams were deployed to assess the damage. Shortly after arrival, an earthquake hits the island, causing massive damage, casualties and overwhelming resources of local authorities. This chain of events tested the technical capabilities and procedures for dealing with unpredictable events.

Mr Ronald Jackson, Executive Director, Caribbean Disaster and Emergency Management Agency (CDEMA) stated, “I don’t think there is any doubt that a virtual crisis room (VCR) is useful. This is something that we are for. We have used many other tools to provide a common operational picture and have explored other options to share information among multiple players.”

Participants agreed that the exercise was a success as the chain of sudden and unpredictable events was a good test of their capabilities to respond to natural and man-made hazards, public health and safety and security threats.

Synergy 2017, an emergency coordination exercise, represents the first use of the Virtual Crisis Room concept in the Caribbean region. The exercise brought together representatives of the Caribbean Public Health Agency (CARPHA), the Caribbean Emergency Disaster Management Agency (CDEMA), the Regional Security System (RSS) and the Caricom Implementing Agency for Crime and Security (IMPACS) and its 2 sub-agencies — the Regional Intelligence Fusion Centre (RIFC) and the Joint Regional Communication Centre (JRCC).

The exercise was part of the Global Crisis Response Support Programme (GCRSP), an initiative funded by the European Union. The GCRSP is a 2–year capacity development programme to strengthen crisis response and early warning capacities in the Caribbean region.

NOW Grenada is not responsible for the opinions, statements or media content presented by contributors. In case of abuse, click here to report.
Tags: caromcarphacdemadisasteremergency responseexercisegcrspimpacsjrccrifcsynergy
Next Post

Registration Amnesty now on at the Inland Revenue Division