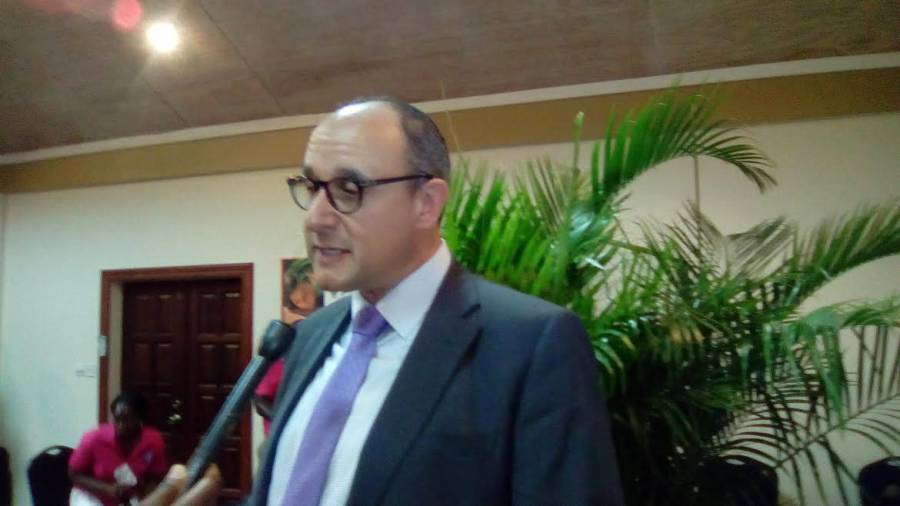 This story was posted 5 years ago
in Business, General News, Travel/Tourism
2 min. read

Top Hotelier Sir Royston Hopkin who operates a 6-star AAA property has welcomed the decision by US hotel chain Kimpton, to construct and operate its second Caribbean property in Grenada.

“We welcome you on board. Grenada will be the beneficiary. We look forward to working with you now, and in the future,” said Sir Royston to developers, during the launch ceremony on Tuesday. Sir Royston owns and operates the Spice Island Beach Resort which is located on the Grand Anse Beach.

The San Francisco-based Kimpton is a leading collection of boutique hotels and restaurants in the United States. It also operates a resort on Grand Cayman, and is scheduled to open its second Caribbean property in early 2019, in Grenada. It will be called Kawana Bay and will be built on the site which formerly housed the Flamboyant Hotel and Villas. It was announced last year by the management of the Flamboyant that a new company had purchased the property, which was up for sale and it closed its doors in July 2016.

At the launch, an assurance was given that the former workers will be on the priority list during the hiring st.ge when the new property is completed.

“We will be replacing the lost jobs,” promised Ambassador Warren Newfield, when he told invited guests — who joined the developers and government in the ceremony to announce the start of work on the project which will cost US$58 million. Almost 100 workers lost their jobs when the Flamboyant closed down. Newfield is one of the main developers behind the project.

However, the hotel that they knew will no longer exist, as only 2 of the buildings will remain and all others will be demolished — what was once the Flamboyant Hotel will now become a 5-star property that will be known as “Kimpton Kawana Bay Resort.” This 146-key resort will comprise 110 luxury studio rooms and 45 suites. 12 additional penthouse apartments will also be available for sale to private owners.

Scheduled to open in early 2019, the international luxury resort will be owned and developed by True Blue Development Limited, a division of the Tau Capital Group of Companies. Tau Capital specialises in development projects internationally, and has a successful track record across numerous industries spanning 20 years. Amb. Warren Newfield is the founder of Tau Capital Corp. and serves as its Chairman.