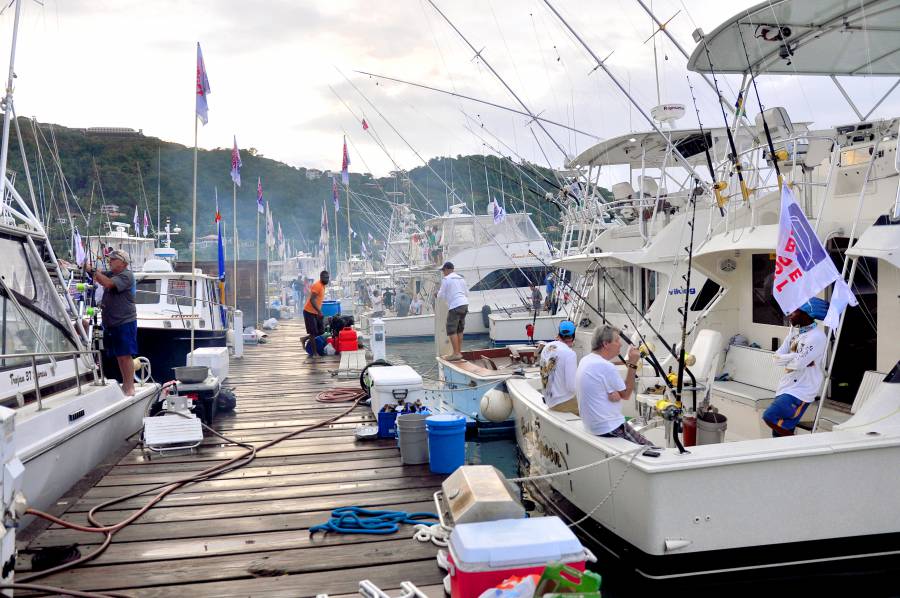 This story was posted 5 years ago
in PRESS RELEASE, Sports, Watersports
2 min. read

On 22 January 2017, scores of spectators, including the Prime Minister of Grenada, Dr the Right Hon. Keith Mitchell lined the picturesque Carenage to view the parade of boats before the much-anticipated Bimini Start of the 2017 Budget Marine Spice Island Billfish Tournament (BMSIBT). At the sound of the cannon from Fort George, 59 boats set out for Day 1 of 3 days of exciting sports fishing. This year’s tournament, dubbed the Grand Slam 48, delivered on its promise encouraging a full release tournament and embracing the digital world. This year a total of 90 Billfish were released: 45 Blue Marlin, 5 White Marlin, and 40 Sailfish, while sport fishing enthusiasts around the region and internationally tuned into the billfish action thanks to live online streams and radio coverage.

A record 287 anglers, including 6 junior anglers and 10 female anglers participated this year, with winners emerging in various categories after 3 days of competition. At the Awards Ceremony held on 25 January, Isaiah Aleong–Baksh of Pair-a-Dice (Trinidad & Tobago) was named the Top Junior Angler, and Silvie Rolles of Destiny (Martinique) was presented with the award for the Top Female Angler. David Sheridan of Hard Play II (Trinidad & Tobago) copped the 1st place Angler Award. The 2017 tournament also saw an increase in registration of Grenadian boats. This, organisers believe, is a significant indication of the growing interest in the sport here in Grenada. Pipe Dream won the prize for Top Grenada Boat, and Hard Play II (Trinidad & Tobago) claimed victory, winning 1st place boat with a total of 9 releases and 4,200 points.

While there was no Grand Slam winner this year, several vessels came close, releasing 2 of the 3 billfish on each day.

From the tournament base at the Grenada Yacht Club, anglers expressed their pleasure at being back in Grenada for another outstanding tournament as old friends reconnected and new networks were forged. In remembering those who have gone before, a minute of silence was held for former SIBT Committee Chairman (1986 to 1998) Angus Minors, who was laid to rest 2 days before the start of the tournament.

Chairman of the Organizing Committee, Mr Richard McIntyre, commended the anglers for their efforts and thanked the sponsors who made the 2017 Budget Marine Spice Island Billfish Tournament a resounding success.

In preparation for future events, particularly the 50th anniversary in 2019, Mr McIntyre pledged continuous improvement in the facilities and use of technology.