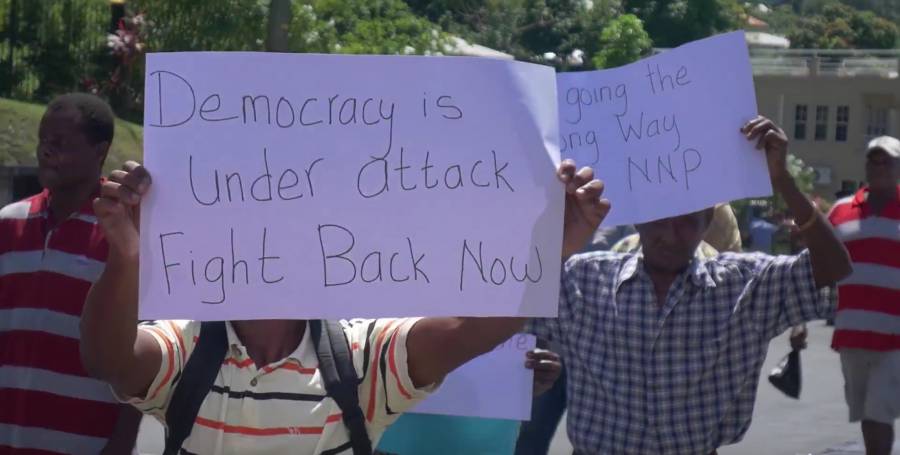 Supporters of the National Democratic Congress (NDC) took to the streets in protest on Wednesday 22, February 2017, to show their disapproval with Governor-General Dame Cécile La Grenade’s recent decision to terminate 7 Returning Officers at the Parliamentary Elections Office.

The protest, which began at the Alleyne Francique Roundabout at Kirani James Boulevard in St George’s, was led by the Party’s Political Leader Sen. Nazim Burke, and Chairman Vincent Roberts.

In speaking to the media prior to the commencement of their placard-laden march, Vincent Roberts continued to express his disappointment. He said, “Whatever the pretext is, it does not appear to be right,” and even if the law is correct in their termination, we have to look at the greater good.”

The NDC speculated that the move by the Governor-General can be seen as being politically motivated. However, during this week’s Post Cabinet Briefing, Government Minister Hon. Nickolas Steele denied this, and affirmed that the GG acted in her own deliberate judgement.

In response, Roberts said he believes that the information about the Officers and their contracts must have reached the GG through certain sources. He went on to speak about the wording of the letter received by the terminated officers. “The letter says it was done in her own deliberate judgement,” and according to Roberts, this “is a phrase that is used as a panacea; it covers many things.”

According to Roberts, this untimely decision has caused the NDC to resist “based on the practicalities,” and they “are marching today to protect democracy.”

NDC’s Political Leader, Sen. Nazim Burke, stated that “The issue is about the purging of the Electoral Office on the eve of an election.” He said he considers this to be a “mass firing of workers,” which has never happened before in Grenada’s history. Both Roberts and Burke indicated that this could have been done at another point in time, as putting inexperienced people in that Office runs the risk of corrupting the results of a free and fair election.

“It means if somebody who lacks integrity is in charge of that poll, then the result of the poll itself can fall into question,” said Burke. According to Burke, this is a “desperate gamble by the prime minister and his team to see how they can secure some kind of political advantage.”

Deputy Political Leader of the NDC, Joseph Andall, also shared his concerns. He addressed a statement made by Minister Steele regarding the people’s rejection of the Elections and Boundaries Commission during last year’s Constitution Reform. “One can only interpret this to mean that Government is hell-bent on exacting revenge on the people for exercising their rights and rejecting that Bill.”

The rowdy protesters stopped in front of the Parliamentary Elections Office in Tanteen, where they were addressed by both Roberts and Burke, who told them to be prepared to stand up for democracy, and not be discouraged. Burke reminded them that this is a “fight for democracy,” and “this march begins the new struggle for liberation of our country.”

The protesters then chanted their way to the front of the Ministerial Complex at the Botanical Gardens before going their separate ways.

A post on Facebook by the National Democratic Congress (NDC) states – The struggle to protect our Democracy and for a Free and Fair Election continues this Friday, February 24th, with a bigger march in the town of Saint George. The march begins at 4:00 PM. Remember “Eternal Vigilance is the Price of Liberty”!

General elections are constitutionally due no later than mid-2018.