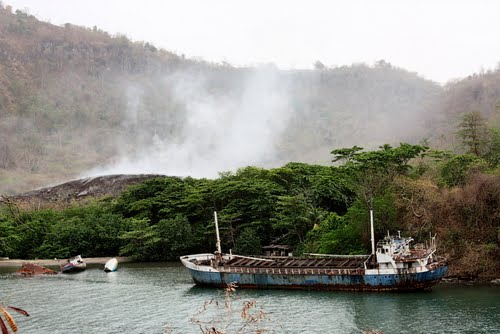 This story was posted 5 years ago
in Environment, General News, Health
2 min. read

It is almost 1 year since the dumpsite at the Perseverance Landfill on the western side of the island has been burning and causing travelers to raise serious concerns about their health.

During the weekly post cabinet briefing, Minster for Health, Hon Nickolas Steele, was questioned on this issue. In response, he revealed that he is very much aware of the situation and they are seeking to find ways to ensure that the “problem is alleviated.”

According to Minister Steele, the problem at Perseverance has to do with the way garbage has been stored over the past decades, and the Government is looking at ways to have proper waste management. This may include having a new location for the dumpsite.

The Health Minister also said that he has plans to approach Cabinet by next month, with the notion of putting a ban on the importation of polystyrene containers, commonly referred to as Styrofoam, which has been proven to be extremely hazardous to the environment. Steele said they will be taking the necessary steps to prevent further damage to “Pure Grenada.”

Also giving leverage to Minister Steele’s statements, was Hon. Clarice Modeste–Curwen, Minister for Tourism and Civil Aviation. She spoke of the “high potential” risks involved with the burning at the dumpsite, as it relates to the negative impact of persons’ health. She also mentioned tyres that are being burned which contributes to the health risks.

Minister Modeste–Curwen assured of the Government’s commitment to solving this issue. She also noted that there are persons in Grenada who are interested in recycling, and this is something she gladly welcomes.