These Shall be Thine Arts: The meaning of the Mace of the House of Representatives

These Shall be Thine Arts: The meaning of the Mace of the House of Representatives

This story was posted 4 years ago
in Arts/Culture/Entertainment, General News, OPINION/COMMENTARY
4 min. read 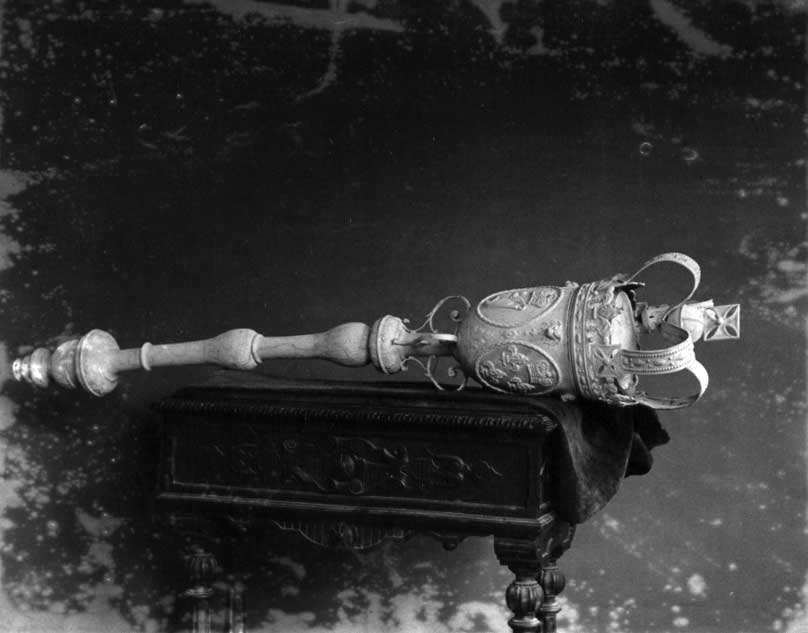 Mace of the Lower House of Representatives, Grenada
Share

On 7 February 2017, Grenada celebrates 43 years as an independent nation. It is, however, ironic that proceedings in the Lower House of Parliament, which is Grenada’s primary law-making body, cannot proceed without the presence of the Mace, a colonial artefact passed on to us from the days of slavery. It begs the question that many Grenadians should ask, are we actually independent, or are we “in the pen dancing?”

A Mace is a heavily ornamented staff of wood or metal used today as a symbol of parliamentary democracy. It was originally a weapon used to exercise the authority of the King or Queen against citizens who did not follow the order of the day. In 1415, however, it became a symbol of royal authority in sittings of the British Parliament. This occurred after King Henry V arranged for a Mace to be carried into the Lower House of Parliament, which allowed privileges of the House to be enforced through the speaker. British colonies, like Grenada, inherited this system by default, so in contemporary Grenada, our 1781 Mace symbolises the authority of the House through the Royal authority of Elizabeth II, the Queen of Grenada.

Grenada has two Maces, one for the Senate or Upper House of Parliament, and one for the House of Representatives or Lower House. A Mace was fashioned for the Senate when it was first inaugurated in 1967 as part of the establishment of a parliamentary government when Grenada became an Associated State with Great Britain. This followed the failure of a West Indian Federation. The Mace for the House of Representatives, however, was created almost 200 years before, in either 1780 or 1781, according to the Mace’s hallmarked date, but the history remains unclear. Britain had lost Grenada to the French in 1779, so when the Mace was fashioned, Grenada was a colony of France. The Mace would have likely arrived in Grenada after the restoration of British rule in 1784, thereafter taking its place as the symbol of the Old Representative System of government that only represented the white slave-owning class.

Between 1876 and 1925, the Mace supposedly disappeared amidst the absence of representative government, then later reappeared in 1931 during the new phase of limited representative government. It was originally solid silver, with a crown and Maltese Cross, but was refurbished with a coating of gold, three years after its reappearance. Following universal adult suffrage in 1951, it became the symbol for the new form of representative government. During the Grenada Revolution between 1979 to 1983, it was reportedly hidden from the People’s Revolutionary Government, out of fear for its destruction, but quickly resurfaced following the fall of the Revolution and the restoration of parliamentary democracy. It is believed to be one of the largest and oldest maces in the world, but its symbolism for Grenadians remains questionable.

The Mace of the House of Representatives bears Grenada’s first coat of arms, which depicts a scene of enslaved people labouring on an 18th century sugar mill, with the motto, “Hæ tibi erunt artes.” The quote, taken from the poem Aeneid by Vergil, Rome’s acclaimed greatest poet, translates as “These shall be thine arts.” The intended meaning of the quote on the Mace is debatable, but in the poem it means that those who surrender to being conquered shall be spared, and those who remain proud shall be tamed as a way of imposing “peace” and “civilisation.” It is however ironic that these noble ideals were advocated for, along with the enslavement and exploitation of African peoples.

Another perspective would be to take the depiction at face value. “This shall be your way of life” as another interpretation of the quote, is accompanied by the portrayal of a sugar mill being operated by oxen and enslaved African–Grenadians. This provokes the idea of a colonial promise that conquered Grenadians will forever be enslaved to a certain ideology. To keep the Mace as the royal authority of the monarchy and a symbol of OUR democracy is to ensure that the promise of our subjugation will be kept.

Though the Mace of the House of Representatives has had a long rich history, and is one of the world’s most unique, a conversation needs to be had on the significance and implication of its use as a symbol of who we are. As we celebrate our 43 years of independence, let us relegate this colonial emblem to our National Museum, or any other place where Grenadians can come in reverence to acknowledgement of our past and how far we have come. It is time for us to weave the fabric of our identity and create a new symbol that captures the promise of who we want to become.