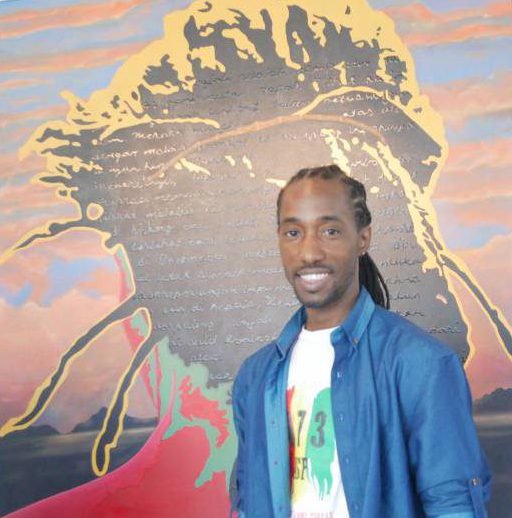 The Waving Art Gallery at the Maurice Bishop International Airport has been transformed into a room of creativity, art and colours, as paintings from a young Grenadian artist, Nicholas ‘Nico’ Thomas, are being exhibited.

Nico’s artwork, themed “A Path to National Identity” features a number of images relating to national identity and introspection. Nico hails from Malti, St David, and has been painting since the age of 6. He taught art at the St David’s Secondary School, and then grasped the opportunity to further his studies in Art at Institut Seni Indonesia (ISI) Padangpanjang, Indonesia. He currently holds a Masters in Art.

Nico says that “the environment that I live in and the circumstances that I’ve been faced with on a daily basis” serve as inspiration for his paintings.

The artist focuses greatly on building a concept rather than on technique, hence the concept of National Identity, and he prides himself on using visual arts to push towards national identity.

According to Mrs Wendy Francette–Williams, General Manager of the Grenada Airport Authority, this exhibition, which opened on Friday, 3 February, is very timely, in the lead-up to Grenada’s 43rd Independence anniversary celebrations on 7 February 2017, themed “Forging Ahead Together for Continued National Development.”

The Grenada Airports Authority has partnered with the Grenada Arts Councils since 2014 in order give local artists more visibility.

The paintings are placed strategically, so that when visitors come in on the tarmac and are in the aircraft, they can’t miss it, day or night. “That’s the first thing that you would see if you look up,” said Francette–Williams. She went on to congratulate Nico and said she hopes “he would be able to transcend this to the wider world.”

Representative from the Grenada Arts Council, Asher Mains, commended Nico on his artistic displays on identity. “The world is looking into people who are looking at themselves and their own identity.” Mains also reminded Nico that “this is something that can translate into multiple cultures and multiple places.’’ District Education Officer, Ms Meryl Lorde, offered congratulatory remarks to Nico on behalf of the Ministry of Education. “Your display of this marvelous work of art — God has given you such a talent, and for that, I can tell you that the nation is grateful.” She hopes that his work will be a motivator to everyone who come across it.

An elated Senator Brenda Hood, Minister Responsible for Culture and Cooperatives, said Nico is someone who is very committed and disciplined, and knows what he wants. The Senator noted that there are a number of young artists in Grenada who need a lot of support and encouragement. “As a Government, we will do what is necessary to promote and help these young people.”

As a means of achieving more recognition for Grenadian artists, Sen. Hood suggested having the works displayed in various embassies throughout the world.

To young aspiring artists in Grenada, Nico advised them to “think beyond this 133 square miles,” and never stop believing and creating.

Nico’s paintings will be freely on display for 1 month at the Waving Art Gallery (next to the Liftoff Restaurant, upstairs airport departures).