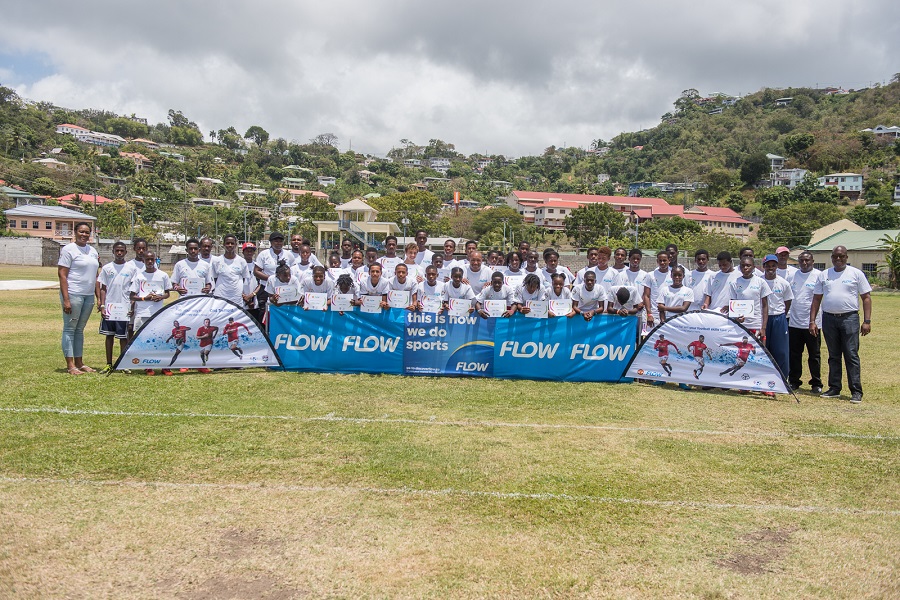 This story was posted 5 years ago
in Football
3 min. read

46 young footballers between the ages of 13 and 16 had their skills put to the test in Tanteen on Saturday at the Flow Ultimate Football Experience — a competition put together by Flow and Manchester United Football Club and supported by the Caribbean Football Union (CFU).

The boys and girls vied for the chance to participate in a talent development football camp in Trinidad and possibly win a trip to Old Trafford, Manchester to visit the facility and see Manchester United play. In the end, it was 13-year-old Shermin Williams of St Rose Modern Secondary School and 16-year-old Shermon Williams of St John’s Christian Secondary School who best demonstrated the abilities needed to compete against 28 footballers from the other 14 Flow markets in the Caribbean.

“Flow has a deep sense of commitment to youth development and this programme helps to hone the skills of young footballers in Grenada. We want to give our young sportsmen and women hope through these life-changing experiences. No investment will yield higher return to our country than one in our youth. Flow is the Home of Sports in the Caribbean; we invest heavily in the development of football and sports in the region and this partnership with Manchester United FC reaffirms that commitment,” said James Pitt, Country Manager of Flow.

Local coaches Andrew Munro, Allana François, Aiken John, Kurt Rennie, Christopher Joseph and Presley Samuel put the kids through their paces at the Roy St John Playing Field in a series of challenges that tested their dribbling, short passing and ball control skills. The programme was specially designed for the Flow Ultimate Football Experience by coaches at the Manchester United Soccer School. The 46 talented footballers were chosen by their respective coaches within their schools and/or clubs.

In May, Shermin and Shermon, along with their coach, Jerry Alexis will now advance to a 2-day skills session in Trinidad and Tobago to experience one-on-one training with CFU and Manchester United Soccer School coaches. They will all participate in a series of drills designed by the coaches and compete for the trip to the world-famous football stadium to witness Manchester United’s final Premier League game of the season up close and personal. The VIP experience will also include a Manchester United Museum visit and a tour of the stadium.

“The Flow Ultimate Football Experience was wonderful, I felt elated to be part of the event. The kids were excited to partake in the different skills that were included. This was a great gesture by Flow to organise and such a great opportunity for our young footballers. I am hoping that there will be more like these happening in the future. I was thrilled that the two winners actually came from my club. I am really proud of them,” said Jerry Alexis, football coach of the winners.

The Ultimate Football Experience is one of several Manchester United and Flow partnership initiatives. In January, Flow hosted the FA Cup Caribbean Tour which gave football fans up-close and unprecedented access to football’s most coveted trophy. The final leg of the tour culminated in Cayman, where Manchester United ambassador Dwight Yorke made an appearance.

Cable and Wireless is Manchester United’s telecommunications partner in the Caribbean.