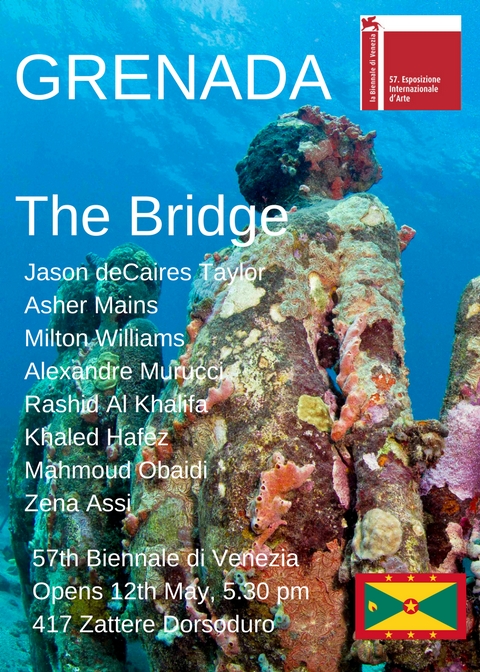 Asher Mains jokes about having a “beach-based art practice.” He scours Grenada’s beaches, searching for the regularly offered detritus, the gifts from the sea. Concerned about the death of the life-sustaining coral reefs in the Caribbean sea, he considers the sea fan the ‘lungs,’ the breath of life. The large, multi-layered humans he then paints become the anthropomorphized figures that need these lungs to breathe, as do we all.

The models Mains uses to create his figures are Caribbean people. The synthesis of peoples that have created this unique region has been kind — beauty is abundant. His creative process involves photography, 3-layer hand cut stencils, spray paint, the sea fans, then finally light directed to cast shadows. His canvas is the rip stop used in the sails of the sailing vessels. It is specifically used for the big ballooning spinnaker, which fills with air to propel the boat with speed. A highly intensive hands-on process, each of the 8-foot tall hangings can take months to complete.

Hung in installation, the viewer is encouraged to walk in and among the figures, thus completing the feeling that one is also in the water with them. People are often perplexed when viewing from the front, not sure if the figure is projected, or exactly at what they are looking. Often when they step to the back view, and audible, “ah” is heard. The lungs of the figures are created by the shadow cast from the actual sea fans. Mains is from the island of Grenada in the Caribbean where he lives and works. A lush tropical jewel, people live from the wealth of the sea. It is estimated that Grenada has the highest per capita consumption of fish in the world. That food source depends on the survival of the reef. Without reef, the whole system breaks down. Reefs in the Caribbean are dying at an alarming rate. Reportedly, 80% have been lost over the last 20 years.

From a family of artists, he has been a traditional painter for many years — since he was a young teen. This exploration into mixed media installations is a recent iteration of his practice and was first seen at the Trio Bienal in Rio di Janeiro Brazil in 2015. Mains recently completed a Master of Fine Arts in Creative Practice with Transart Institute, Plymouth University in the UK. He is a teacher of art at St George’s University in Grenada, and also is the director of a fledgling art school in Grenada.

He often tells his students, “When someone looks at your work, there ought to be that sense of place that is felt. They should know that you as an artist have been there and that this is deeply ingrained in you.”

There is no doubt that the viewers of Asher Mains ‘Sea Lungs’ in the Grenada Pavilion at the 57th Biennale di Venezia will feel his angst for the survival of the coral reef and the people of his island home. The Grenada Pavilion at the 57th Biennale di Venezia will open 12 May and continue through 26 November at 417 Zattere, Dorsoduro, Venice. The artists exhibiting have been chosen through a rigorous selection process of the curator, Omar Donia. They include Jason deCaires Taylor, Milton William, Asher Mains, and International artists Khaled Hafez, Rahsid Al Kalifa, Mahmoud Obaidi, Alexandre Murucci, and Zena Assi. The Grenada Tourism Authority, ‘Pure Grenada-Spice of the Caribbean’ has supported, among others.