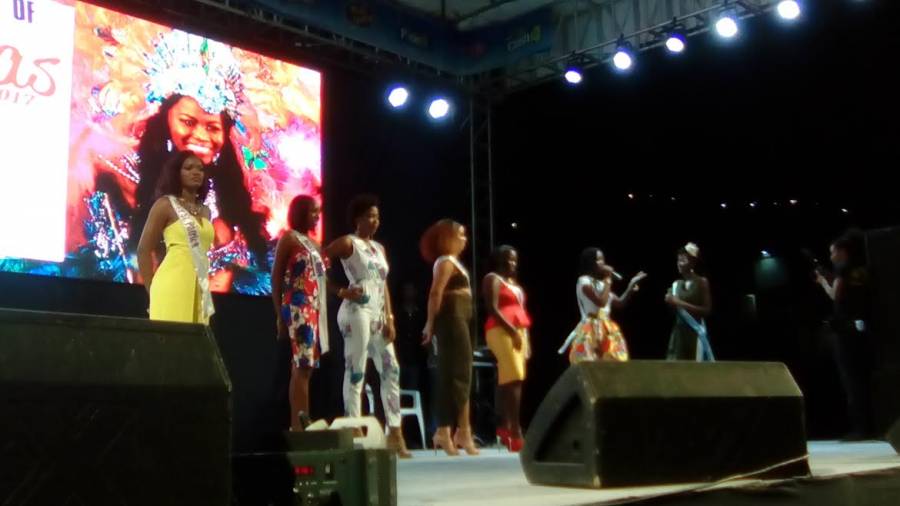 This story was posted 5 years ago
in Arts/Culture/Entertainment, General News
3 min. read

The 2017 National Queen Show will be staged in a new venue as part of measures being undertaken by the Spicemas Corporation (SMC) to reduce the cost of hosting the final show for this year’s carnival celebrations.

Joslyn Sylvester-Gairy, Chairman of the SMC made the announcement last Saturday while delivering remarks at the launch of Spicemas 2017.

“We will be making changes to ensure that you do have not just a spirit-filled carnival but that we really and truly deal with the issues of monies, and how we can at the end of it not go into the debt that we continue to go in from year to year,” she told the thousands who came out to participate in the launch of the celebrations at the Roy St John Playing field in Tanteen.

Gairy said that the show will be held for the first time at the Spice Basket cultural and entertainment facility located in Beaulieu. By using that facility, it is expected that the SMC will save on production costs.

During a recent news conference, SMC Chief Executive Officer Kirk Seetahal, explained that the corporation has an accumulative debt of EC$800,000 in its 5 years in operations, and new measures are being put in place to reduce and eliminate it.

During last week’s sitting of the Senate, Brenda Hood Minister for Culture, with direct responsibility for Carnival, piloted a bill to amend the Spicemas legislation. This will provide for the corporation to charge a licence fee of varying costs, to all who will be having cultural events during the carnival period. The carnival period is defined as from the date of carnival launch until the second Wednesday in August.

The licence fee will vary in cost. Failing to obtain a licence violates a mandatory law of land, with criminal charges and a penalty of a maximum of EC$50,000 or 2 years imprisonment.

NOW Grenada is not responsible for the opinions, statements or media content presented by contributors. In case of abuse, click here to report.
Tags: carnivalchangeexpenditurejoslyn sylvester-gairykirk seetahallinda strakernational queen showsmcspice basketspicemasvenue
Next Post

CHORES Medical Mission is Back in Town