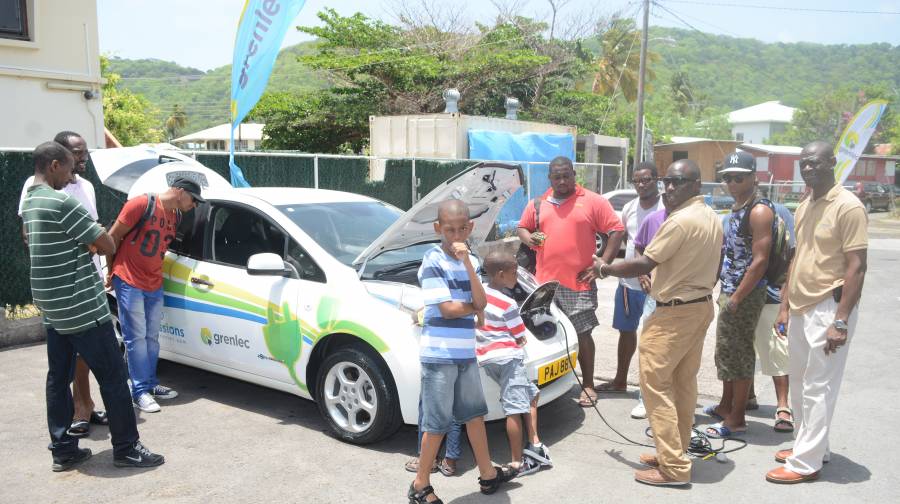 An electric vehicle at the inaugural Energy Expo on Saturday, in Carriacou
Share

The Grenada Electricity Company (GRENLEC) continues to spread its various messages of support to the community in a positive way, with the staging of its inaugural Energy Expo on Saturday, on the sister isle of Carriacou.

During the 4-hour exercise members of the company handed out flyers to customers, and explained how to read the electric bill. The importance of preparing for the upcoming Atlantic Hurricane season which commences on 1 June, was also highlighted.

Employees of hardware stores Paddy’s Enterprises and Dollarman One-stop from Carriacou, and The Wireman’s House from Grenada detailed a variety of electrical products including LED lights and other energy saving items, but the section of the expo which generated the keenest interest was the electric vehicle. Ronaldo George, an employee of the company, gave a comprehensive account of the function and importance of this innovation. He said that the electric vehicle has a zero emission on gas, is cheaper to operate, cheaper to maintain, better for the environment and safer for one’s health.

Manager of the Carriacou branch of GRENLEC, Wallace Collins said that he was very impressed with the display, and with interest shown by the scores of people who attended. He added that the essence of the expo was to bring further knowledge to their customers on how to save on their electricity bills. GRENLEC, Collins pointed out, is in the business of connecting, not disconnecting customers.

When considering the sister isles’ experience of Hurricanes Janet in 1955, Ivan in 2004 and Emily in 2005, Collins lamented that it is important for residents to keep their guard up especially as the hurricane season starts in a couple of days’ time.

Collins noted that in the event of a natural disaster such as a hurricane, residents need to appreciate and understand the enormous role GRENLEC would be called upon to play, as one of the first respondents.

He said that the expo might well become an annual event on various products and services, as the company continues its community outreach programme to ensure that current and would-be customers are abreast of the vision and mission of GRENLEC.

The event, which was held at Wayne’s Auto Rental and Services also afforded customers the opportunity to spin and win a GRENLEC product after successfully answering a GRENLEC-related question.