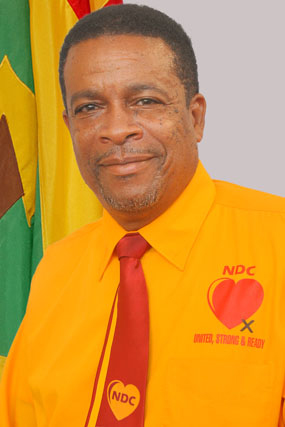 This story was posted 4 years ago
in Agriculture/Fisheries, General News
2 min. read

NDC Caretaker for St Andrew South West, Sylvester Quarless, at a media briefing on Monday, 22 May 2017, outlined his vision as a political candidate for the next general election.

According to Quarless, his mission is to “facilitate private-public sector partnership to encourage and support investment in education, skills training and enterprise development, thereby stimulating job creation and increased productivity.”

His vision “is for a globally competitive economy which capitalises on our natural resources to stimulate the development of enterprise while securing business opportunities for all Grenadians so that they can become economically stable and self-sufficient.”

Quarless is mainly concerned about the rural economy and development in the area. However, there are some other aspects he claims that the National Democratic Congress (NDC) is planning to work on, should they be elected into office. These include the re-socialising of the youth through sports and social education with a focus on increasing transparency to reduce corruption in the public sector.

The St Andrew South West Caretaker stated that there is nothing going on in St Andrew, economically and considers the place to be in “tatters.” He briefly mentioned the 3 banks that removed their branches in St Andrew, small businesses which are closing down and the high levels of unemployment. “The general climate is one of despair.” However, he assured the nation that there is “hope on the horizon” with the NDC.

He mentioned the NDC’s 5 platforms going forward as it relates to the policy agenda — in agriculture and agribusiness, energy, health and wellness, IT and tourism. Quarless said his party intends to reintroduce the farm support system for farmers and give them the necessary incentives and items needed to assist with their production.

“What is happening now is not good for the economy,” as profit is not being generated. He said at one time, St Andrew was known as, and referred to as the “breadbasket of Grenada.” This is no longer the case, and the government seems not to be taking heed of what is taking place. He then urged and encouraged the people to give the NDC a chance.