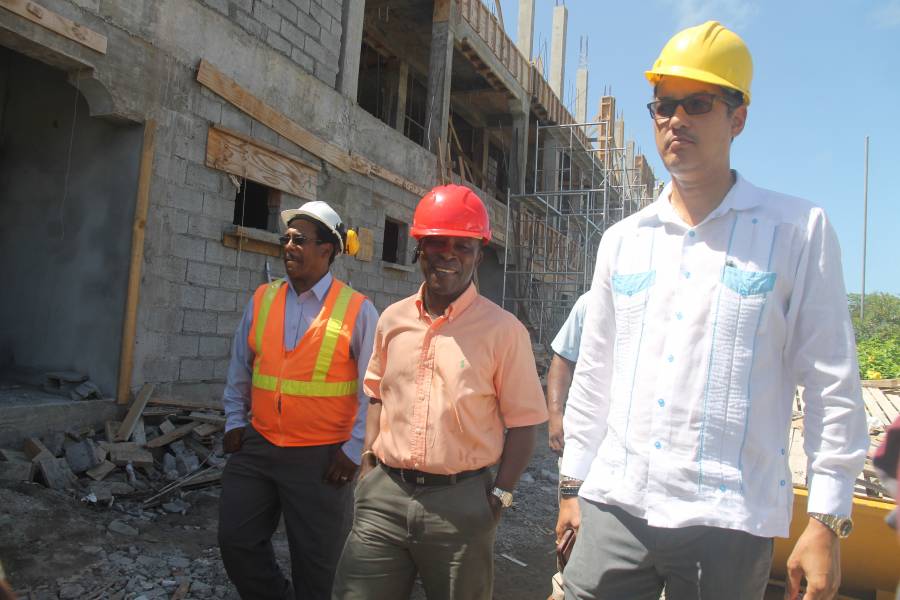 This story was posted 5 years ago
in Business, Travel/Tourism
3 min. read

A building boom is unfolding in South St George, with hotels and apartment complexes employing hundreds of workers. Demolition work has started in the True Blue area which once was home to No Problem Hotel, Cedars Inn and Mall 21, ahead of the start of the 1st phase, the construction of a 150-room hotel to be completed in 18 months.

The 2nd phase involves the construction of 100 high end hotel rooms surrounded by a gym, a 2nd swimming pool, a mall and courts for tennis and basketball. The investor for the $64 million project is Rupert Reece, a Trinidadian with strong Grenadian roots. His mother is Lucille Charles from Victoria, St Mark.

“The construction phase…both of them together will employ 175 people,” said Michael Archibald, spokesman for the developers. “Once everything is up and running you are looking at about 100 people on permanent employment in the hospitality industry.”

This was one of many projects visited on Thursday by minister for international business Nickolas Steele and Prime Minister Dr Keith Mitchell.

A short distance away, a 4 storey 40 room apartment complex was also under construction. Lower down the road and still in True Blue, 70 persons were on the job building a 72-bedroom 36-apartment complex. This project started in January and is expected to be completed at Christmas.

“Now we are at June, we are on the roof. We expect to finish this in October/November, have it all outfitted and have people walking in here with luggage by December/ January,” the contractor told the Prime Minister, in reference to the project by a Trinidadian businessman/investor.

The investor also plans to start construction on a 108 room 6-floor apartment complex, also, in True Blue this September.

While overseas and Caricom nationals have been rushing to invest in Grenada’s building boom, locals are also not getting left behind.

Grand Anse born Eric Guy has returned home and has hired 79 persons who are now building the 60 room Blue Star Apartment complex in L’Anse aux Épines, to open in January. “It has been extremely easy for us to do business here,” said Guy who lived in New York before relocating to Grenada. “GIDC, the Prime Minister’s office, the hardware stores.  It has been an honour doing business here in Grenada hassle free.”

On the site of the Blue Star Apartment, Prime Minister Mitchell says that as investor confidence continues to soar more investors are targeting Grenada.

“They would not have come to Grenada 5 or 6 years ago. The atmosphere for investment was extremely poor. But now they see a government interested in private sector initiatives and helping to build an economy so that the quality of people’s lives could be improved. That’s why they are here.”

Another home-grown talent, Francis Jeremiah, has employed 70 persons to build a 40-room apartment complex in Grand Anse. “We can’t mark time. We didn’t come to sleep,” said Jeremiah, who started in March and aims to finish in record time. “We wake up and we moving forward very quickly. So we are attacking building 1, building 2, building 3 simultaneously.”

The construction boom in South St George comes on the heels of multi-million dollar projects in that area, the likes of the Silver Sands Hotel project and Clarke’s Court Bay Marina which have employed nearly 1,000 persons.

NOW Grenada is not responsible for the opinions, statements or media content presented by contributors. In case of abuse, click here to report.
Tags: apartmentconstructionemploymentgidchotelinvestorsouth st georgetrue blue
Next Post