This story was posted 4 years ago
in Business, General News, Politics
3 min. read 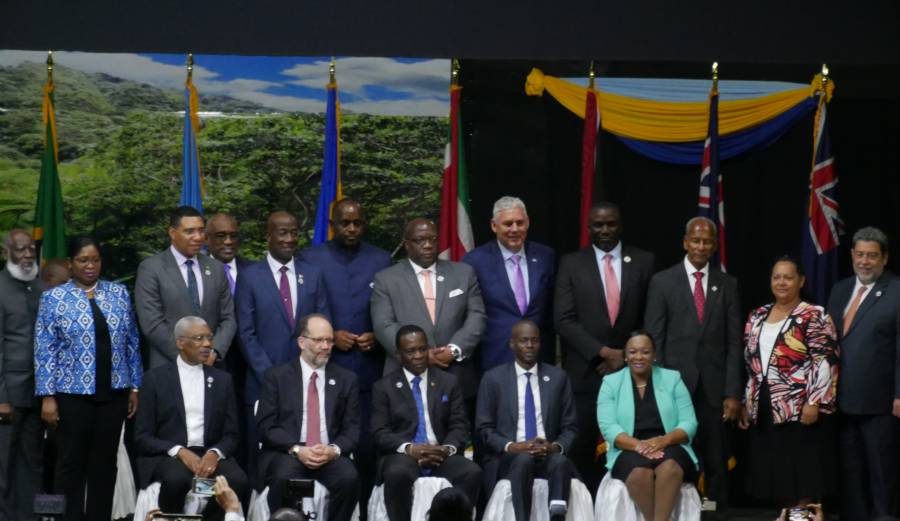 Prime Minister Dr Keith Mitchell says that he has become convinced that perhaps the most difficult task is to develop ‘inclusive’ mechanisms that close the ‘political distance’ between our integration arrangements and the demands of our people, at all levels of our societies — but especially with our young people.

Addressing the opening ceremony of the 38th Regular Meeting of the Heads of Government on Tuesday, he said that even with the heightened level of activity at the regional level, the region’s integration process continues to be levelled with criticism in several important quarters of the community, for being somewhat removed, if not completely aloof, from the more tangible aspirations of our Caribbean People.

“We need to find similar modalities that work on a regional level. Closing the political distance with our regional constituents also means that we must deliver on the proposition committed to by our forebearers, as far back as Dickenson Bay in 1965,” he advised.

Speaking about the unfair trading practices among Caricom member states, the incoming Caricom Chairman said that he was sure that we would all understand how, 52 years on, our regional constituents are becoming sceptical, when it is demonstrated time and time again that — after satisfying all of the Treaty provisions — they cannot export to their own neighbouring countries, duck meat from Suriname or honey from Grenada.

“The same honey is exported to the United States and Europe and has won several international awards for quality. These actions diminish the hard-earned gains of our integration efforts — so much so that it is widely chronicled about Caricom that intra-regional trade is obstructed by non-tariff barriers, which all affect our global competitiveness,” he said. “Colleagues, deepening partnerships through the CSME requires that we urgently dispel with the ‘knee jerk’ nationalistic response in exchange for higher community ideals in some key areas.”

Speaking about transport and connectivity within the region, Dr Mitchell reminded the Heads that transportation is the lifeblood of the integration process and that service needs serious improvement.

“Weak domestic and intra-regional air travel added to low service competition and high travel costs — all culminate in the reality that Caribbean countries connect more easily to destinations outside of the region than to destinations within Member States,” he said while calling to address the issue.

“Colleagues, an integral aspect of our approach in addressing the issue of air connectivity must include reducing the cost of air travel to rejuvenate intra-regional travel. It would represent a significant installment to the ‘regional integration account,’ if Heads would collectively agree to reduce airline ticket taxes, as well as other fees which attach to the cost of intra-regional air travel,” he said.

Mitchell told the heads that he is of the belief that political presence on the board of airlines, such as LIAT, is not helpful to its proper management and efficiency. “LIAT’s sustainability would have benefited if it was run more as a private sector company. Governments could then subsidise flights to given destinations or routes that are in the best interest of their respective countries,” he said.

Thirteen Heads, along with Foreign Affairs Ministers, as well as regional territories who are Associates and or Observers at Caricom, are attending the meeting which opened on Tuesday and will conclude on Wednesday.

While in plenary the Heads discussed a number of regional issues including the area of regional security and crime, the CSME, health and a proposal from the Economic Commission of Latin America and Caribbean.