This story was posted 4 years ago
in Arts/Culture/Entertainment, Travel/Tourism
3 min. read 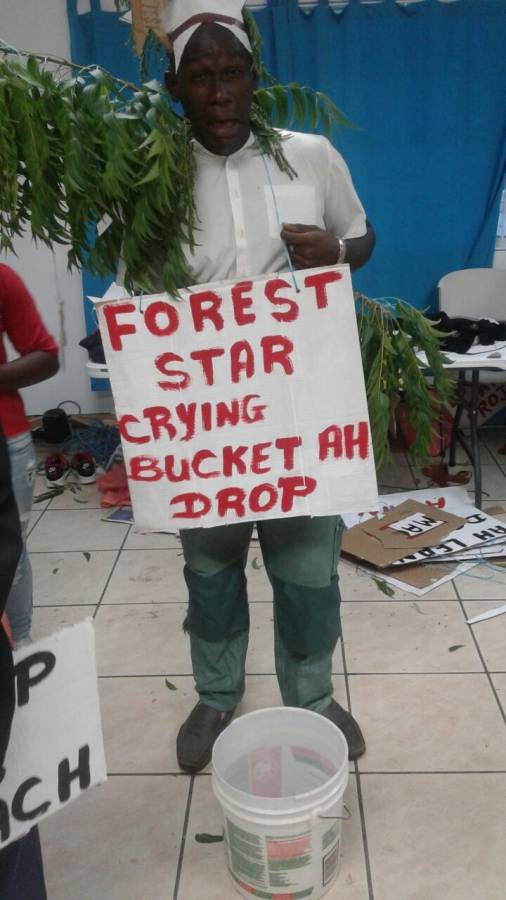 Ole mas presentations of local current affairs, and major regional and international issues were all on display when the ‘Face of Ole mas’ directors hosted their first ever event last Sunday at the Youth Centre.

Over the years, the Ole Mas competition — which is normally held about 3 weeks before the final events of carnival — began dwindling in participation and presentation quality. The main organisers decided that they would not host it in 2017 and, in an effort to fill the void, a company was born with persons who were closely associated with ole mas activity.

After months of planning, Sunday’s activity — which had a significant number of entries — was attended by hundreds of persons who, from the opening piece of ‘Long Rope for Mega Goat’ experienced bursts of laughter, eruptions of happy emotions and explosions of enjoyment.

“For years I am the emcee at this ole mas thing, and I must say this is the most [number of] entries I have seen,” said Shirma Wells, master of ceremonies for ole mas shows since it was first held at the No Problem venue in the form of a tea, fashion show and ole mas.

The local issue receiving the most attention was the ‘Terry Forrester matter’ while USA president Donald Trump received his fair amount of comedic presentation based on international news.

Though none of the pieces about Forrester was awarded winning positions, they were some of the most laughed-at. Some will never forget ‘Terry Led by The Spirit’ as the impersonator followed someone with spirited liquor; or ‘Forest Star Crying Bucket Ah Drop’ ’ as the impersonator dropped a bucket and screamed to the top of his voice; or ‘Terry Ambush He Self,’ as the impersonator placed bush underneath his armpit. Then there was the piece with ‘Terry under Pressure,’ one in which the impersonator sat on a pressure cooker covering his head with the pot cover and shaking himself to indicate that the heat was on.

As for Trump, the focus was on his tweeting, the possibility of his impeachment and his presidential style. ‘Trump Ass in Peach’ was a memorable piece as the impersonator wore a pants with peach colour to the back. The winning piece as King of Ole Mas was ‘Trump Piggy Cannot Stand Up’ — depicted by the impersonated trying to make a toy pig stand up.

The recent ‘Caricom Heads issue with Gaston Browne,’ was not left out as there were a depiction of ‘Browne as no Balls’ and ‘Gaston running away from Keith’ — the impersonator used a fake Liat plane.

There were not many pieces about politicians, but the decision of the New National Party to appoint Nickolas Steele as caretaker for the South received its fair share of presentation, while there was a play on the name of the CEO of the Spicemas Corporation, Kirk Seetahal. It was fun to see the impersonator haul a seat tied around with the message ‘Curt Seat Ah Haul.’

After almost 4 hours the official results for the Face of Ole Mas 2017 Competition held at the Youth Development Centre on Sunday, 23 July 2017 were: