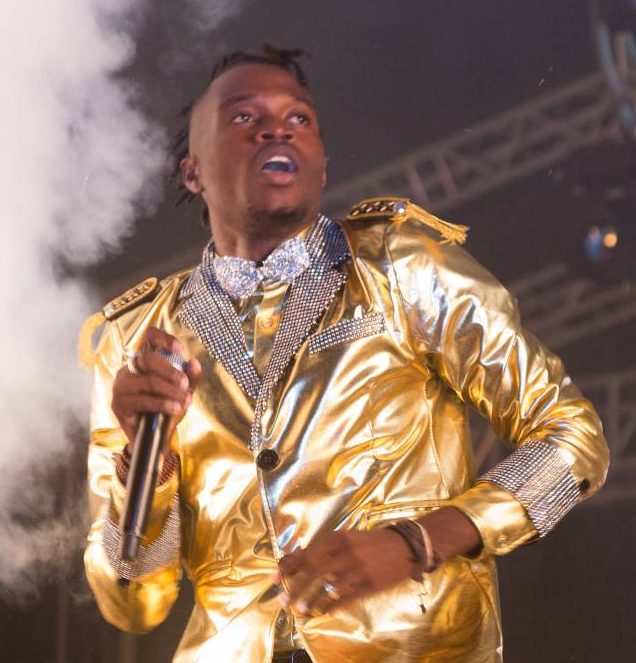 This story was posted 5 years ago
in Arts/Culture/Entertainment, General News
4 min. read

24-year-old Jalon ‘Boyzie’ Olive from Sauteurs St Patrick, made history at the National Stadium on Saturday morning, as he was crowned for the 4th year as Spicemas Soca Monarch Champion.

Boyzie came into the competition as one of the people’s favourites and performed his rendition ‘D Intention’ in a gold suit surrounded by persons portraying various aspects of Grenada’s culture.

Having already captured the crown in 2013, 2015, and 2016, the defending monarch took his performance to another level as he completed it singing and controlling the packed stadium from a hoisted crane.

Despite singing in position 13, Boyzie was able to capture the crowd’s attention and control them to the point that they literally broke down the fence barricade which stood between the audience and the media at the front of the stage. Boyzie amassed a total of 429 points, just 7 points more than Dingyaan Henry and Nyelon Williams (Lil Natty & Thunda), who was also a favourite of the crowd. The St David’s duo opened the show with their performance of their song ‘Top Strikers.’

Coming in 3rd position with 419 points were Kellon and Kelson Ogiste, (Luni Spark & Electrify) with their rendition ‘Natural Disaster.’ The brothers who hail from the north of the island, are no strangers to the stage, and are currently celebrating 15 years of being in the music business. They stated that they were pleased with their performance and they believe that their fans got what they were expecting. Their electrifying performance captured the hearts of their fans, and the duo was able to deliver accordingly.

King Boyzie stated that this competition was indeed a very stiff one, and he had to work his hardest ever to retain his title. The humbled monarch thanked everyone who assisted him throughout the preparations. He stated that this crown means a lot to him, as he always wanted to leave his mark in the industry.

(A previous version of this article incorrectly stated that Boyzie won the Soca Monarch for 4 consecutive years.)

Newcomers to the Soca Monarch 2017 Stage