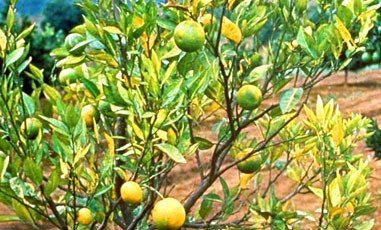 This story was posted 4 years ago
in Agriculture/Fisheries, Environment, Video
2 min. read
Share

Citrus Greening Disease, is a new disease threatening citrus fruits in Grenada. However, it is not harmful to humans or animals.

According to Thaddeus Peters, Agricultural Officer at the Pest Management Unit of the Ministry of Agriculture, this disease was detected just about a year ago, after leaf samples were sent to an institution in Belize to be tested. “In 2015 into 2016, we began seeing the symptoms that looked suspicious.”

The Citrus Greening Disease is caused by a bacterium and spread by an insect called the Psyllid. It causes the yellowing of leaves and fruits, premature dropping of fruits and can cause the death of trees in advanced stages. According to Peters, the visual symptoms can take up to 2 years before being noticed.

Peters noted that the yellowing of the leaves is somewhat similar to that of nutrient deficiency in plants. However, due to its irregularly spread colouring pattern, farmers and technical staff are able to spot the difference.

In March of this year, an island-wide survey was done to determine which areas are most affected by the disease. This survey indicated that it was generally spread right across the island.

In an effort to eliminate the disease, the ministry is advising persons to remove the trees that have reached advanced stages, as their fruits will not be consumable. For immediate control for those plants that are still in the early stages of infection, farmers can do cultural management, apply pesticides as well as spray, or use biological controls.

Peters affirmed that the ministry is in contact with outside agencies that can assist with long-term control of the disease. The disease can be difficult to eradicate, but measures can be put in place by the ministry and farmers alike. Farms that have not been affected must be monitored weekly and treated accordingly.

As time goes by, the ministry will continue to train the farmers and extension staff as well as to increase public awareness about the disease.

Although Grenada does not export citrus fruits in large quantities, Peters believes that the effect of this disease can be both great and negative. The only positive way to know whether or not a plant is infected, is to do a lab test, which unfortunately cannot be done in Grenada.

NOW Grenada is not responsible for the opinions, statements or media content presented by contributors. In case of abuse, click here to report.
Tags: agriculturecitruscitrus greening diseasedonella hostenministry of agriculturepestpsyllidthaddeus peters
Next Post