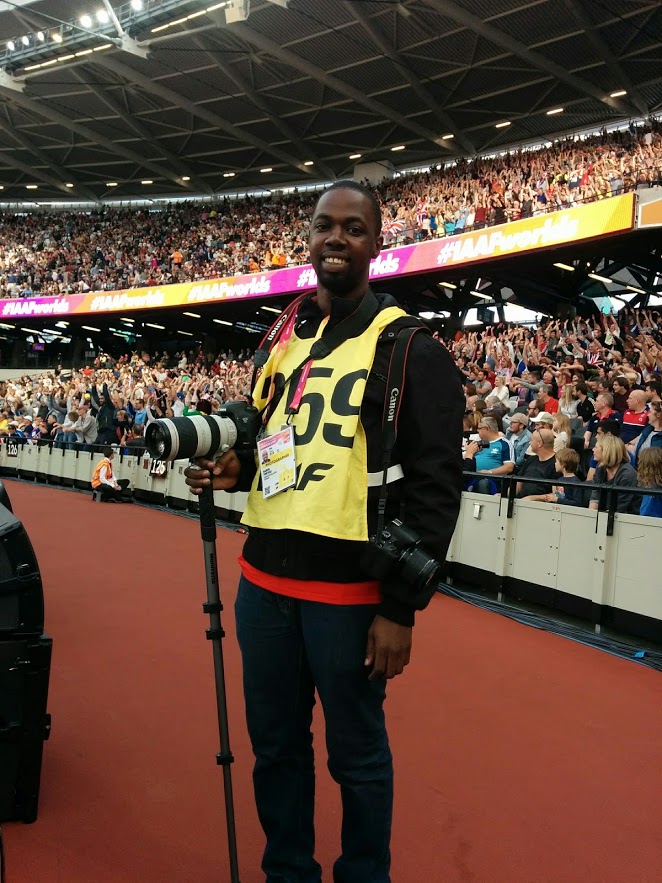 This story was posted 5 years ago
in PRESS RELEASE, Sports, Youth
2 min. read

Haron Forteau, a graphic designer by profession, made history on the media circuit as he became the first Grenadian photographer to cover an international track and field event at the IAAF World Athletic Championships 2017 which was held in London, England.

“It was a wonderful event to attend and be a part of”, says Forteau. “It was amazing being around world class athletes, photographers and journalists and it definitely inspires you to work harder and do more in this industry,” Forteau continued. The event was held over 10 days featuring International Athletic superstars such as Usain Bolt, Wayde Van Niekerk, Justin Gatlin, Allyson Felix and many more — where many wins and upsets were experienced.

“You had to be careful not to be star struck whenever you notice the athletes you’ve been looking at for years are right in front of you. It’s a demanding environment where you need to be on top of your game to focus on the athletes you want to cover in the events. Usually, you’re surrounded by 50+ photographers at a time, so you have to be careful and be focused.”

Forteau thanks the Grenadian public, persons who have given support via the Go Fund Me page, and persons who have given contributions directly as well as his family and friends who gave their unwavering support. “It was a challenge to get the funds in such a short space of time but I’m glad it was done and hopefully this ground-breaking moment will allow the private and public sector to promote international media based initiatives like this.”

When asked about the future of this initiative, Forteau stated that there are a few events on the radar such as World Indoor Championships in Birmingham, UK in 2018, Carifta Games 2018, CAC Games 2018, World Athletic Championships 2019, and Olympic Games Tokyo 2020. “It is something that I believe is ground-breaking and needs to be invested in. Hopefully, the private and public community can see what has been done and lend support to future initiatives such as this where we can tell our athletes’ stories from our own unique vantage point.

NOW Grenada is not responsible for the opinions, statements or media content presented by contributors. In case of abuse, click here to report.
Tags: haron forteauiaaf world athletic championshipsphotographerphotographysports
Next Post