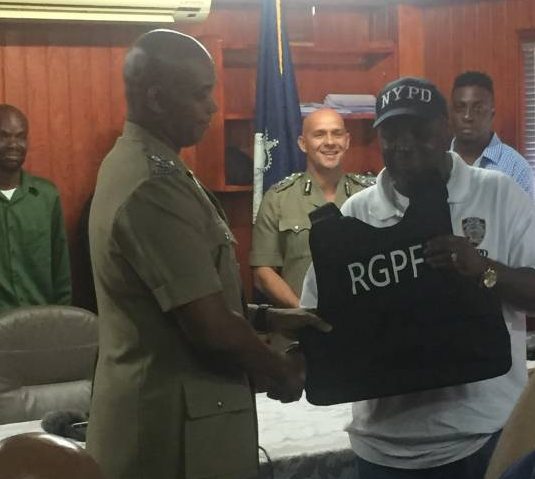 Nimrod Ollivierre, a 21-year veteran of the New York Police Department (NYPD), along with other Grenadian-born officers from other departments, made a special donation to the Royal Grenada Police Force (RGPF).

Following last year’s unfortunate incident in St Mark, which led to the death of Officer Daniel Edgar and civilian Kevin Downes, on Thursday, 7 September 2017, officers of the NYPD handed over bulletproof vests to the RGPF at Police Headquarters.

Ollivierre extended a special thank you to the RGPF for giving his team the opportunity to partner with them to provide this assistance. “Our goal is to try and get every member of the Royal Grenada Police Force a vest.” He said although their first stint only had 100 vests, they have given themselves a short-term goal of getting 500 more.

According to Ollivierre, despite this donation, they truly hope that the officers do not need to use it, in the way that it is meant to be used — in the midst of pure violence. He described Grenada as being a ‘paradise,’ and as he said, Grenadians should be proud of the low crime rates in comparison to some other countries in the region.

Additionally, the vests are simply a preventative measure as the police embark on making the necessary preparations for what can happen. “Policing is not for policing today; it’s for policing in the future,” he said, and the RGPF must be prepared and stay on top of things, which can be as simple as information sharing.

Ollivierre acknowledged the police officers and persons in the diaspora who assisted in fundraising the cost of the bullet proof vests ($9,500) plus shipping ($2,000). A donation of riot helmets should arrive soon. Ollivierre reiterated his team’s commitment to the cause. “We will do whatever we have to do…”

Deputy Commissioner of Police, Franklyn Redhead, expressed gratitude to the members of the NYPD and other departments for their donations on behalf of the RGPF. “It is no secret that Grenada has very finite resources,” he said, welcoming the initiative for the RGPF to be even more effective in its work.

Redhead stated that he knew it took a lot of effort from persons to ensure that this initiative became a reality, and guaranteed the foreign teams that this ‘will go a long way in improving officer safety.’