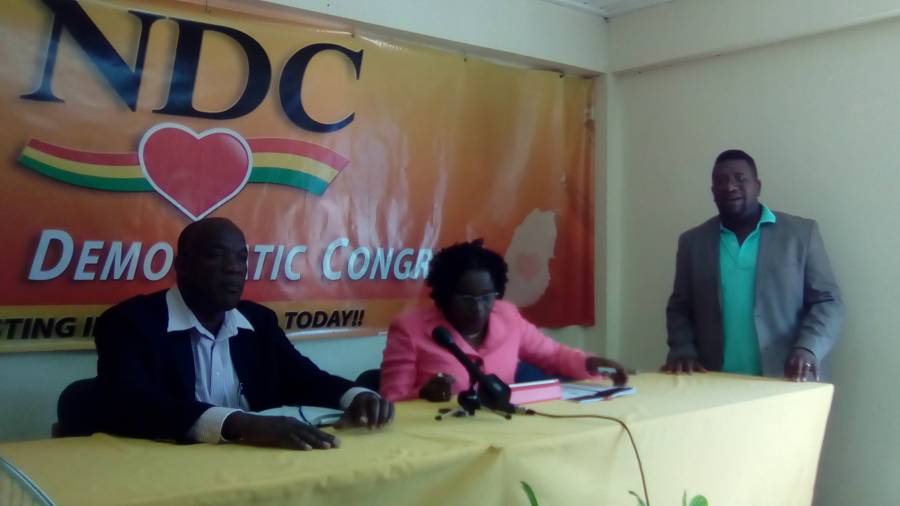 Randal Robinson, Public Relations Officer of the main opposition party, the National Democratic Congress (NDC), has described as ‘fake news’ that his party has received election campaign financing from the Republic of China on Taiwan, with a promise to severed ties with People’s Republic of China if the NDC is elected to govern the affairs of the country following the upcoming general election.

“To be clear the National Democratic Congress has always respected the One China policy and if you will remember, it was not the NDC who switched from Taiwan to China, it was the NNP,” said Robinson during the NDC weekly Monday news conference. “Any story that you hear coming from anybody about Taiwan is fake news,” he said.

“The National Democratic Congress has not done so, in fact, I think somebody might want to consider whether or not somebody wants to swindle some money from the Chinese and use the Taiwanese name, someone may want to consider that,” said Phillip Alexander who was one of the persons to address the media on Monday.

Describing the question as fake news, Claudette Joseph recently endorsed as the party’s caretaker for the Town of St George said: “As far as I am aware that is fake news, I can confirm that,” as she turned to Alexander asking him if he can confirm.

Elaborating the denial, Alexander said that not only did the party not receive any form of funding from Taiwan, but he was certain that no individual within the party structure has received funding from the Taiwanese.

The Republic of China on Taiwan currently has diplomat ties with St Vincent and the Grenadines and St Lucia. Grenada severed ties with Taiwan in January 2005.

Grenada presently has no election campaign financing legislation, but it has been a recommendation from various delegations from the Organisation of American States (OAS) who observed previous general election campaigns and voting days in Grenada.

“The political party and campaign financing regime in Grenada is based on private funding and characterised by the lack of regulations on the funds political parties can raise and spend on electoral campaigns. There is no government funding, direct or indirect, and political parties and candidates are free to raise their own funds from both local and international groups,” said the report presented after the 19 February 2013 General Election, which the then opposition New National Party (NNP) won by a landslide victory.

“The lack of regulations, privileges parties and individuals with wider and more affluent support bases generating an imbalance in competition among the participants in the electoral race,” the report suggested.

NOW Grenada is not responsible for the opinions, statements or media content presented by contributors. In case of abuse, click here to report.
Tags: campaignchinaelectionfake newsfinancinglegislationlinda strakernational democratic congressrandal robinsonregulationtaiwan
Next Post