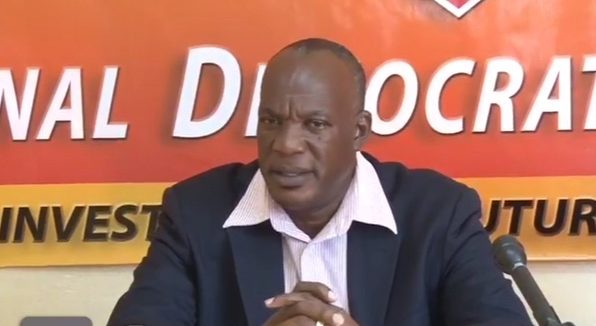 National Democratic Congress Caretaker for St Andrew North West, Phillip Alexander used the opportunity during the Party’s weekly Press Conference on Monday, 4 September 2017, to speak to issues he believes are critical to the nation.

Speaking to the Prime Minister’s National Address, which took place on 30 August 2017, Phillip said, ‘some critical matters’ were left out, including the issue of the national debt and where the country currently stands regarding the structural adjustment programme.

According to Phillip, the structural adjustment programme was expected to end in 2016, but, is apparently still in effect. He believes the Prime Minister has the responsibility to let the nation know what is going on.

During the PM’s Address, mention was made of the issue of public workers’ pensions. To this, NDC’s Caretaker for St Andrew North West, posed the question, “Why now?” He said the PM headed the government for 18 years, however, is still asking for another 2 years to address this matter. “We find this ridiculous; almost out of thought by the honourable gentleman.” Commenting on the changes made to Cabinet by the Prime Minister, Alexander expressed disappointment, saying that these changes have an impact on the wage bill of the nation.

There has been an increase in the number of advisors among other things, which Phillip noted, means there will be a budgetary expansion. He stressed on the fact that more monies will have to be spent to facilitate such changes. “The wage bill expansion, in light of a structural adjustment programme is something that is unacceptable,” and is not in keeping with the national interest.

Alexander urged the general public to give due consideration to what the PM says and does not say. He believes that what is needed to help Grenada’s situation is the proper management of the country’s already scare resources, not the addition of more ministers and advisers.