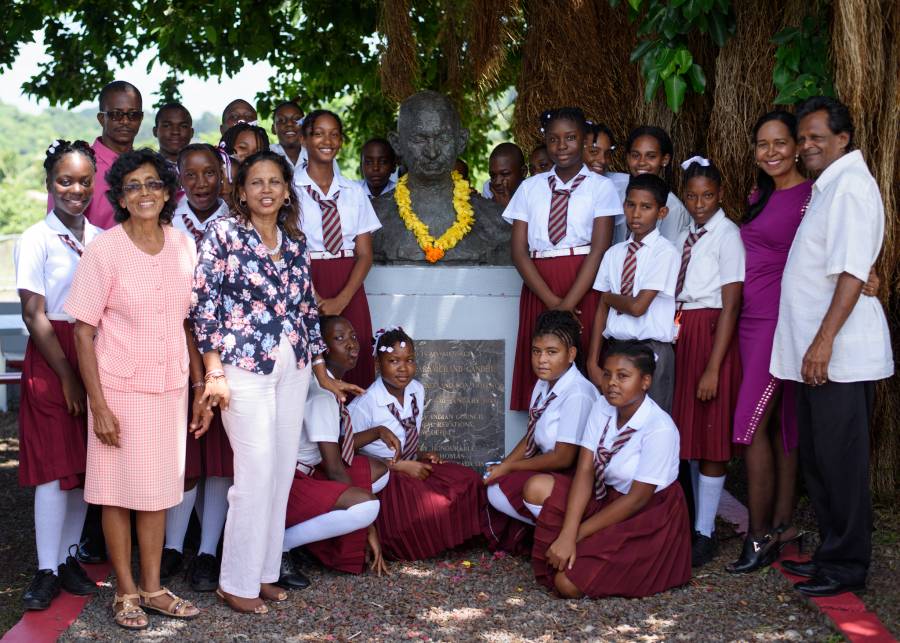 This story was posted 5 years ago
in Arts/Culture/Entertainment, Education, PRESS RELEASE
3 min. read

The event, spearheaded by the IGHF sought to raise the awareness of the students on the life and contribution of Gandhi, and to increase cultural and heritage awareness about India in Grenada. The occasion of Gandhi’s birthday was seen as the perfect opportunity to educate children in an interesting and interactive manner about one of the world’s greatest leaders. Speaking on the occasion, Shampa Moses, a student of Mac Donald College, delivered an eloquent and informative presentation about the life and legacy of Gandhi. The programme included a PowerPoint presentation by the school’s IT teacher, Akeem Cyrus, and the Foundation’s Public Relations Officer, Marilyn Modoo Winsborrow presented the school body with some fascinating details of Gandhi’s life and contribution. The activity was incorporated into the students’ weekly assembly, and complimented their literacy theme during the Month of Literacy Awareness. The student body was very participative and interested, and joined the foundation members to adorn Gandhi’s bust with flower petals and a garland, and for picture taking. The foundation, in keeping with the theme and the literacy thrust, also donated books on the great Gandhi to the school’s library.

The Indian High Commission of Trinidad, on behalf of the Government of India, donated a bust of Gandhi to Grenada, which was installed at Mac Donald College in January 2013. The bust was erected during Mac Donald College’s 50th anniversary celebrations, at a site overlooking Sauteurs and not far from the first Indian arrival site, Irwin’s Bay. The choice of Mac Donald College was fitting as the Grenada East Indian Cultural Association had been very instrumental in establishing the institution in 1963.

In the present age of widespread distrust, violence and hatred are rampant in the name of retaliation. In this context, Gandhi’s gospel of non-violence is noteworthy. His concept of a unique non-violent movement countered British oppression and ultimately earned India’s freedom from colonial rule. Tackling violence with peaceful protest, he demonstrated the power of non-violence. His famous words ‘An eye for an eye only ends up making the whole world blind,’ effectively highlights the futility of vengeance.

Gandhi’s method of mobilising people has set an example for many oppressed communities around the world as well. It has been successfully employed by leaders such as Nelson Mandela in South Africa, Martin Luther King in the United States and Aung Saan Sun Kyi in Myanmar. This shows the enduring relevance of Gandhi’s philosophy over the passage of time.

The IGHF is a non-profit organisation which is committed to promoting and preserving East Indian culture and heritage in Grenada. Beginning in 1857, Grenada had received East Indians who were contracted to work on the plantations as indentured servants. Over the last 40 years, the country has witnessed the migration of Indian nationals as businesspersons, doctors, and professors, administrators and students at St George’s University. On behalf of and for all the Indians who have made Grenada their permanent adopted home, the IGHF strives to spread an appreciation of Indian culture.

NOW Grenada is not responsible for the opinions, statements or media content presented by contributors. In case of abuse, click here to report.
Tags: heritageindiaindo grenadian heritage foundationmac donald collegemahatma gandhi
Next Post