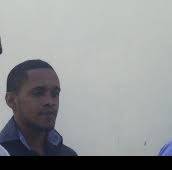 Murder Accused - Gabriel Alleyne on his way to Court
Share

27-year-old Gabriel Alleyne, of Mt Parnassus St George, made yet another appearance at the No 1 St George’s Magistrate’s Court on Monday, 23 October 2017.

The defendant was slapped with the indictable charge of Non-Capital Murder on 27 June, after an alleged altercation between himself and another patient, Anthony Alexander, who was also warded at the Mt Gay Hospital on 26 June 2017. The altercation left 49-year-old Anthony Alexander of Laura Land, St David dead.

Representing Alleyne as he faced Magistrate Tamara Gill, was Attorney-at-Law Pauline Hannibal. Alleyne appeared quite calm and composed as he sat in the prisoner’s dock listening attentively to the 3 witnesses. The first witness was a medical doctor with a specialty in anatomical pathology. She performed the autopsy on the deceased, stating that he died as a result of Asphyxia by Strangulation.

The second witness called was a nursing assistant who is employed at the Mt Gay Hospital and who was on duty at the time of the incident. She was questioned and cross-examined by the Prosecutor and the defendant’s attorney, respectively.

Alexander’s mother, visibly still saddened by her son’s death, was the 3rd and final witness for the day. Upon being questioned by the Prosecutor, she revealed to the court the reason her son was admitted to the hospital and when she last saw him alive.

According to the Prosecution, more witnesses will be summoned by the state to give evidence during the course of the trial.

Alleyne is also facing another charge in the court, that of Wounding, after he stabbed his mother in the chest at their home in Mt Parnassus. This incident, which was the main reason he was sent to the Mt Gay Hospital for evaluation, occurred approximately 12 days before his unfortunate altercation with Anthony Alexander.

Sources have indicated that the 27-year-old defendant is a troubled and overly hyperactive youngster. The matter was adjourned to 21 November 2017, however, he is expected to return to court for mention on 13 November 2017.