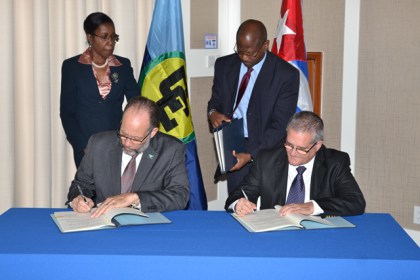 The first trade and economic cooperation agreement was signed back in July 2000 and provided for, among other things, the promotion and expansion of trade in goods and services by means of free access to the markets of the parties; elimination of non-tariff barriers to trade; the establishment of a system of Rules of Origin; and the harmonisation of technical and sanitary and phyto-sanitary measures.

The agreement signed today between Caricom Secretary-General, Ambassador Irwin LaRocque and Cuba’s Ambassador to Caricom, Julio César González, seeks to expand the preferential market access into each other’s market and signals the prospects for even stronger and more profound trade and economic ties.

According to the Caricom Secretariat, the protocol is a further demonstration of the commitment of both sides in advancing the trade and economic relationship that was established many years ago, providing possibilities for investment.

The Protocol also seeks to imbue in the Caricom private sector, in particular, an urgency to access the Cuban market utilising the preferences provided under the original agreement itself.

Having regard to the fact that Caricom already has an existing Trade and Economic Cooperation Agreement with Cuba, it would be in the interest of both parties to ensure that the expansion of preferential access into each other’s market, provided for under the second protocol to the agreement.

Caricom said it is committed to further deepening and strengthening its partnership with Cuba as new opportunities are sought to expand its trade and investment relationship.