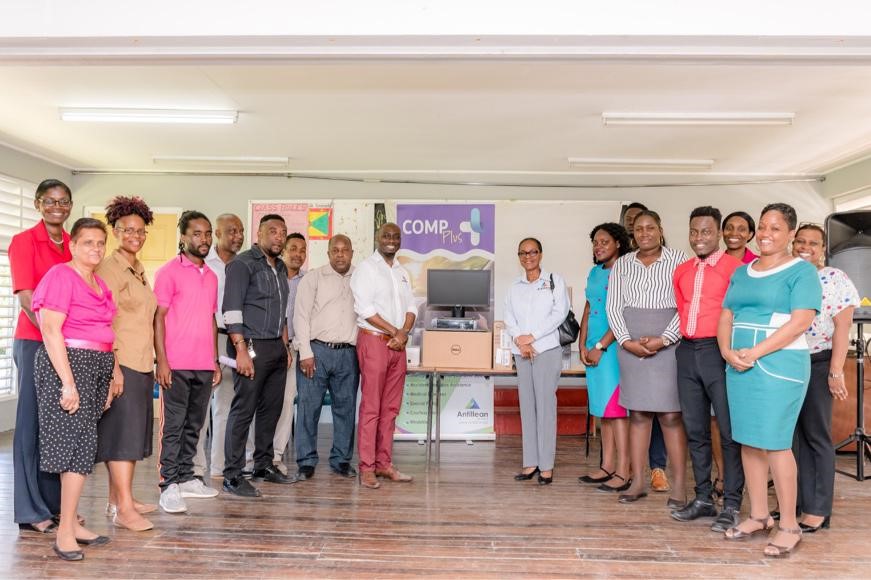 This story was posted 4 years ago
in Education, PRESS RELEASE, Technology
2 min. read

Antillean Group, one of Grenada’s top life and general insurance companies, is continuing its initiative to support the education of children across the nation. The insurance company donated 2 new desktop computers and a printer to the Bonaire Government School in St Mark.

Executive Chairman and Managing Director of the Antillean Group, Kennie John presented the IT equipment to principal of the school Terry Francis, during a handing over ceremony at the school on Friday, 24 November 2017.

Bonaire Government School is one of two schools adopted by Antillean Group, as the company seeks to enhance the education of its students. The school was a natural choice, as it is a combination of the former St Mark’s R.C. and the St Mark’s Anglican Primary School, both of which John attended.

In his address to the students at Bonaire Government School, John motivated and encouraged them to make good use of the opportunities that come their way while at school, which will lead them to become successful and productive young men and women.

John remarked: “In today’s world we have to prepare our kids and resources are always one of the limitations of kids. St Mark’s, being one of the less developed parishes in our country, I don’t believe that the students should be any less off. In fact, by their results this year it shows that they are bright kids, they just need a chance. If donating a few computers will give them that exposure to join the rest of the world where most kids today have that opportunity, this is what we thought to choose to do; something that’s close to our heart.”

Principal of the Bonaire Government School Terry Francis expressed deep gratitude for the timely donation given by Antillean Group, saying the computers will significantly enhance the school’s computer lab, which only opened for the first time to grades 3 to 6, in September 2017.

NOW Grenada is not responsible for the opinions, statements or media content presented by contributors. In case of abuse, click here to report.
Tags: antillean groupbonaire government schoolbrainstorm productionscomputersdonationL’Esterre Rosary School
Next Post