This story was posted 3 years ago
in Arts/Culture/Entertainment, Education, PRESS RELEASE
3 min. read 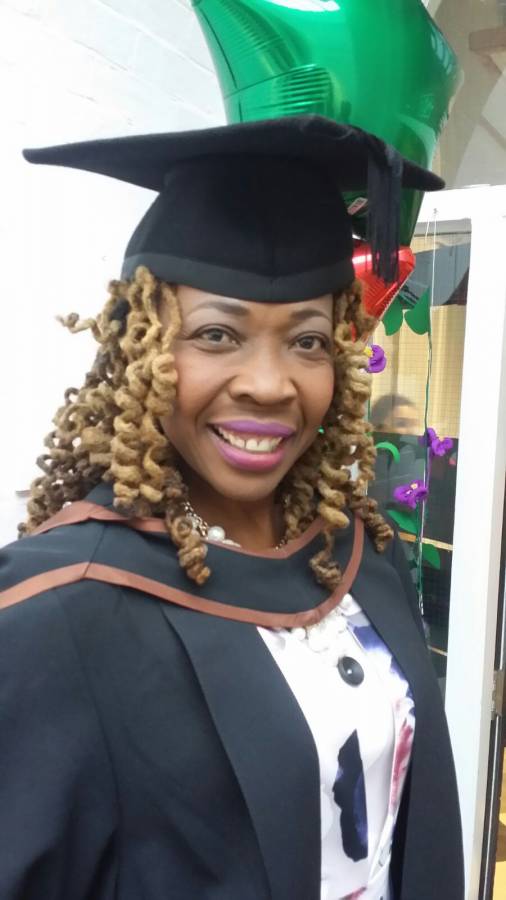 Susan Jones–Benjamin, a resident of Gouyave, St John, recently graduated in December 2017, from Goldsmith’s University of London, England, with a Master of Arts, with merit, in Arts Administration and Cultural Policy – a much needed area of expertise, required to meet the needs of the growing cultural industry in Grenada.

The parish of St John is known for many high achievers, such as the now-famous 400-metre Olympic Gold medalist, Kirani James. Jones–Benjamin is hoping to continue to make her own contribution as it concerns the development of culture in Grenada, being a dancer and teacher of the art form. Jones’ many accomplishments include forming the Spices Dance Company in 2001, building her own Dance Studio in 2008 in Gouyave; being instrumental in the revival of the Moko Jumbie art form in 2011; reviving Carols by Candlelight in Gouyave, in 2012; initiating the St John’s Cultural Day in 2009 and hosting dance productions, workshops and lectures throughout the tri-island, including at the St George’s University (SGU).

Currently the Assistant Chief Cultural Officer in the Ministry of Tourism, Civil Aviation and Culture, Jones–Benjamin said, “My plans are to use my brand-new knowledge for the betterment and advancement of the arts in Grenada. I have already been appointed to the board of the [Grenada National] Museum, so hopefully we can bring about positive changes in this area. Of course, without a doubt, I will attempt to help revitalise the Arts Festival.”

Jones–Benjamin received acceptance to Goldsmith’s University of London in 2016, after going through a stringent application process. She said, “The feeling was magnificent. I immediately knelt down in my cubicle and gave God all honour, praise and thanksgiving for his favour towards me.”

Having been accepted, Jones–Benjamin applied for the Commonwealth Scholarship, which she found out about through the Ministry of Education and Human Resource Development’s Scholarship Desk.

“I decided to apply for it, because I always knew that I wanted to attain a masters and then a doctorate in the arts. I believe in the arts to transform people’s lives and the power to build bridges and break down barriers between people. I was also taught by my parents to never settle for mediocrity, but to achieve your dreams and aim for the very top. I knew of London’s high level of education and I would not be able to afford to pay for tuition by myself. I had the confidence within myself, because of my education and experience within the arts to excel and be chosen by Commonwealth to secure a Scholarship,” Jones–Benjamin explained.

She was once again successful and awarded a full scholarship for her course of study, which would last one year. It was an eventful year, filled with highs and lows. Despite having to absorb the shock of the passing of her mother while abroad, Jones–Benjamin managed to regain her footing and focus on the task at hand. While at university, she got the opportunity to interact with persons and companies leading in the arts in the United Kingdom and experience live performances. She also participated in discussions on cultural policies, in various countries which govern the arts.

“The experience has advanced my knowledge tremendously,” Jones–Benjamin affirmed. “Because I was the only Black Caribbean student in my class, I often intrigued my fellow classmates and lecturers. This was evident when I chose the option of Interpretation, Communication and Education in the Museum. For that module, I had to create my own museum. I based my museum on the Revolution. I am very proud of that paper, not only because I got an A, but I was able to educate both my classmates and my lecturers about Grenada. My lectures, in their comments, congratulated me on my passion and thanked me for educating them on Grenada.”

Additional highlights of Jones–Benjamin’s period of study included getting to work with the IRIE! Dance Theatre for 3 months, which she described as being ‘wonderful.’

“There I was in charge of marketing, of the production, and also in-charge of setting and attending dance rehearsals,” Jones–Benjamin said.

Moving forward, in her current capacity and with the knowledge and experience gained, Jones–Benjamin wants to make an even bigger impact on the cultural landscape of Grenada. She said, “There is so much more I would like to do, but really need both financial and human resources to succeed.