by Sandra C A Ferguson

It would seem that the caretaker for St Patrick’s East is seeking to ‘rev up’ support as St Patrick’s residents on the West side survey the disappearance of their beaches and threat to their property, believed to be the negative impacts of the breakwater(?) project that, obviously, was NOT properly planned and executed.

It really does not look good for her political compatriot who has asked his political leader for another chance to represent the constituency, so he could “finish what he started.” If the breakwater is anything to go by, that sounds SCARY! It is understood that nearly all of the majestic coconut palms have just toppled over as the beach disappeared. 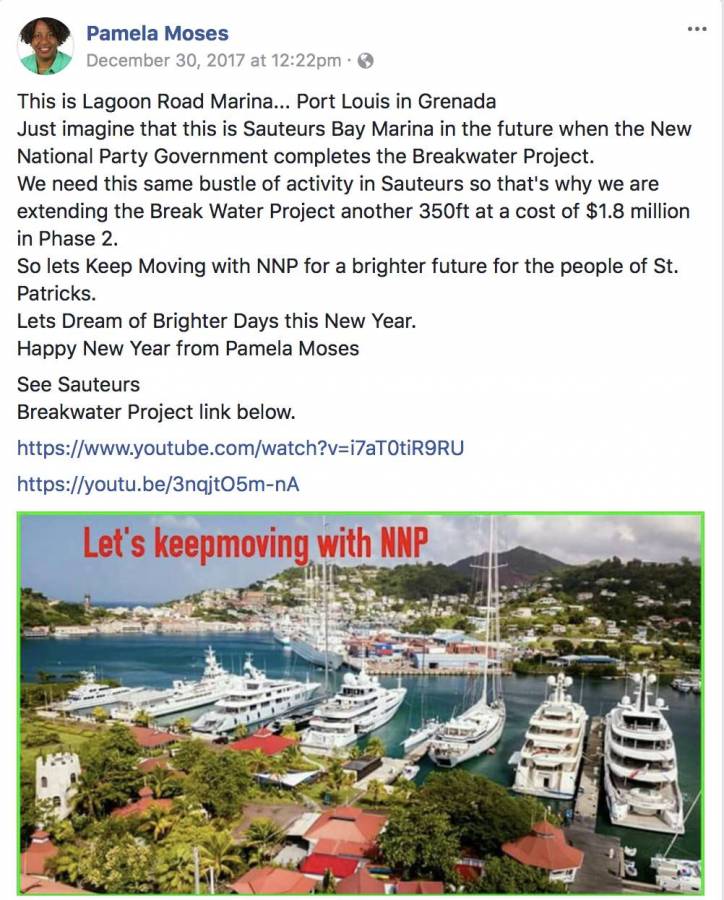 The primary business of the Port Louis Marina is the business of berth rental for yachts and rental or sale of superyacht berths. We have noted that all the superyacht berths were occupied for extended periods during 2017, particularly after the announcement of the political leader that Santa Claus would be coming to town after the presentation of Budget 2018. Very good for the owners/operators of the Port Louis Marina. What spin-offs did this have in the Grenadian economy besides being a lovely photo opportunity to impress those who believe in Santa Claus?

In order to fully appreciate “the bustle of activity” at the Port Louis Marina, and assess what it is actually “delivering” to our economy, this article will take a peek at the following:

This information should aid in assessing whether the people of St Patrick should put their ‘pot on fire’ with the promise of a breakwater project to deliver a Port Louis type marina.

Business Grenada, 5 Star Grenada Special Edition, the glossy publication of the Grenada Investment Development Corporation (GIDC) for the 2016/2017 period, featuring one of the charter operators at the Port Louis Marina, provides an insight into the operations at Port Louis Marina and the possible spin-off on the Grenadian economy. A perusal of this article provides the following information:

Given that the Lagoon, the area occupied by Port Louis Marina is a significant natural, heritage and economic asset of we the shareholders of Grenada plc., it is useful to become aware of the arrangements agreed by the NNP administration of that period and the owners/operators of the marina. It is useful to also recall that the trustee of the nation’s assets is the Governor-General, at that time, Sir Daniel Williams.

There are still unresolved questions in respect of the of the infamous Deed of Release of 5 October 2006, which is purported to have facilitated the transfer of the people’s property to Ambassador DeSavary’s Port Louis for EC$1 but is not registered in the Deeds and Lands Registry of Grenada because ‘it could not be found.’ Peter deSavary’s company then sold property to Camper and Nicholsons Marina Investment (CNMI), whose subsidiaries are the owners and the operators of the Port Louis Marina. It is understood that contracts were exchanged for US$24 million and purported to include water rights.

There is a lease arrangement between the Government of Grenada and Camper & Nicholsons in respect of the Lagoon.

The Annual Reports of CNMI provide information in respect on the area of seabed and the area available for berth rental.

The following information was extracted from the Preliminary Accounts of 2008:

Another reference[2] to a September 2012, special offer of ‘two berths for one purchase’ on the sale of superyacht berths, twinning berths in Grand Harbour Marina in Malta and Port Louis Marina in Grenada noted as follows:-

In respect of superyacht berths, generous and extended tax exemptions apply to the transactions. Among those are exemption from taxes relating to the receipt of rents and profits from ‘land’ in the hands of subsequent purchasers. Superyacht berths are treated as real estate.

2.4 Lagoon Seabed Mortgage to the Bank of Nova Scotia:

In October 2008, Camper & Nicholsons completed negotiations with the Bank of Nova Scotia for US$25 million loan facility for construction of the Port Louis facility, secured against the people’s property. The Bank of Nova Scotia now also has a claim to the people’s property COURTESY the consents given in October 2008 by the then NDC Administration, advised, we assume by the then Attorney-General. A detail to also be aware of is the relationship between the bank’s attorneys and the holder of the position at that time.

The Government of Grenada was not the only entity negotiating debt restructuring in 2013. There were “historic breaches of the Debt Service Coverage Ratio Covenant.” The company undertook initial fundraising of Sterling 4 million through an open offer in May 2013 in order to service and restructure its Bank of Nova Scotia loan in respect of the Port Louis Marina, facilitate business restructuring and fund working capital…”

3. Who is Minding the People’s Business:

The question that we the people need to reflect on is whether or not Grenada plc is getting its FAIR share from this investment in the Port Louis Marina. OUR property, transferred for $1, is tied up in a non-cancellable 99-year lease and is mortgaged to a bank. WHAT are the benefits deriving from this development? HOW are these benefits distributed in the economy and WHO is really benefitting? Is this ‘development’ really serving the best interests of Grenada plc?

This is ‘MOUTH OPEN, WORD JUMP OUT’ season! It is hoped that this information will provide interested persons with a little insight, BEYOND the façade of apparent glitz and luxury of the Port Louis Marina. What advice would we the people give to the Hon. Senator in her quest to secure a brighter future? Is the equivalent of a Port Louis Marina the answer for St Patrick? To ALL those offering themselves for office, they would do well to be reminded: All that glitters in not gold! The noise in the marketplace is not the sale! Do not confound caca poule with egg white! GRENADA DESERVES BETTER!!

NOW Grenada is not responsible for the opinions, statements or media content presented by contributors. In case of abuse, click here to report.
Tags: breakwatercamper & nicholsonsmarinapamela mosesport louissandra fergusonsauteursst patrickyacht
Next Post