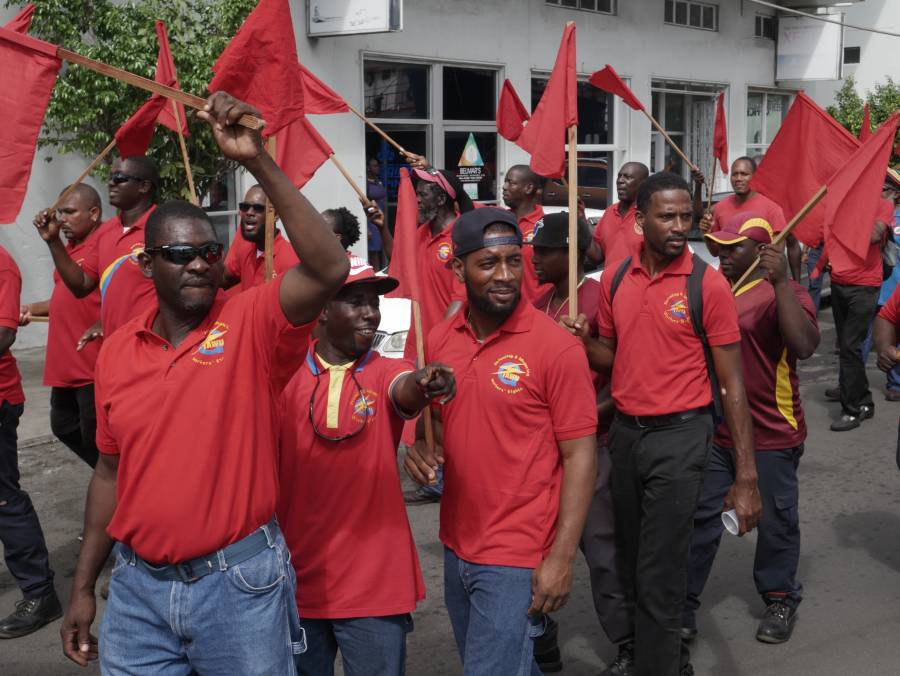 This story was posted 4 years ago
in Business, Video
4 min. read
Share

A recent decision has been made in the saga between NAWASA and the Grenada Technical and Allied Workers Union (GTAWU), regarding contract workers.

TAWU is seeking to have the status of contracted staff of NAWASA regularised, but says in the process they are being confronted by NAWASA’s unwillingness to compromise.

Minister for Labour Oliver Joseph has recommended that the matters surrounding the disgruntled contracted workers must be taken to arbitration, a ruling accepted by the board of NAWASA. However, GTAWU has not made a final decision on its next move.

Outfitted in their red union t-shirts, workers marched through the streets of St George’s, chanting “No permanent, no water”, hinting at a shutdown of NAWASA’s operations.

Shop Steward Emerson Jeremiah, representing the workers of NAWASA, said the company’s operations since the start of industrial action in December, had been significantly affected.

“From the angle of disruption, this protest is having a serious impact on the operations of NAWASA. We can see a lot of the staff are out, people are coming to pay bills and are being inconvenienced; what I can say is that the authority of NAWASA is beginning to understand the serious impact the industrial dispute is having on production, and also the public image of the company.”

Shop Steward Patrick Francis representing the workers of the Grenada Ports Authority, believes the plight faced by workers of NAWASA must be a concern to all employees.

“We recognised it’s a grave situation, one for all and all for one; today, NAWASA, tomorrow could be [us] with the present industrial climate; …it’s to make sure that we have permanent [employment] to secure that for our family… water is the most important commodity, and if we play with water we play with peoples’ life.”

Henry Frederick, representing workers at the Grenada Airports Authority called for an end to contracted work at NAWASA. “We are in full support, because it is ridiculous to have workers on contract for 15 and 20 years, so we need to have that matter resolved now because this has the potential to escalate to where we all not want it to be, and we don’t want our country to suffer because of this.”

TAWU has indicated that workers are now placed on standby as the union is prepared to further escalate its industrial action if its demands are not met.

Meanwhile, in an exclusive interview with NOW Grenada, head of the negotiating team and Director of NAWASA, Christopher De Allie said NAWASA’s request on the current impasse is quite reasonable.

De Allie said the company has expressed willingness to regularise the status of contracted workers, but cannot do so in the manner being proposed by the union. He said not all workers can receive permanent positions, since there are some who are on short-term contracts (3 to 6 months), but workers with contracted services over 2 years are eligible to receive permanent placement.

Regarding the workers under 2 years, De Allie said NAWASA is prepared to make those employees permanent once the position is deemed necessary by the organisation and the employee meets the required performance criteria after his or her contract has expired. He said that despite efforts to compromise, GTAWU has refused to accept that request.

Another area De Allie said both parties differ on is the issue of retroactive payments for workers. He stated that the union is requesting that retroactive payment is applied to those workers receiving the permanent placement for the number of years they have been on contract.

This, he said, poses a bit of a challenge for the company. “The union is insisting that if we make contract workers permanent, that we were also to retroactively apply all their benefits from the day they started. We said that this will be a difficult process to consider because there are issues there, for example, the issue of gratuity on those contracts where workers would have been paid gratuity, and you can’t pay them twice if you go back retroactively… the retroactive application of it would mean that there would obviously be a cost implication to the authority… there are other areas that required detail understanding, salaries and so on, when you make people permanent what bracket would they fall into, and so on, that needed further discussions.”

Regarding the issue of pension for those workers, De Allie, opting not to go into detail, said this is another concern for NAWASA since the company’s pension obligation to workers would increase.

He said based on the recommendation by the labour minister, NAWASA has agreed to go to arbitration but is still unaware of the union’s position.

De Allie also refuted the claim made by Jeremiah, that the company’s operations have been seriously affected by the industrial action. He said only 13% of the entire workforce, mainly from the transmission and distribution department, was involved in Thursday’s demonstration, which had no major impact on the company’s operations.

With regards to the comment made by GTAWU’s president general accusing the company of engaging in discrimination, De Allie clarified that current contract workers have received a number of benefits which include 12.5% gratuity payments, granted both annual and study leave, end of year bonus (which they are not entitled to under the contract) and outfitted with uniforms.