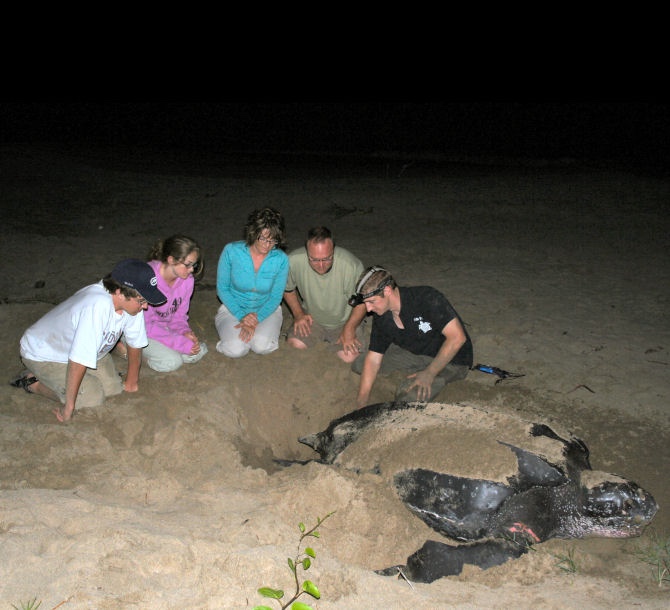 This story was posted 4 years ago
in Education, Environment, Travel/Tourism
4 min. read

Last Monday, I received an image from a friend via WhatsApp, of a mutilated Leatherback turtle killed in an undisclosed location in the northern parish. This prompted me to investigate whether turtle poaching is on the rise in Grenada.

The search for information led me to contact the St Patrick’s Environmental and Community Tourism Organisation (SPECTO), a non-profit environmental and community tourism advocacy group based in St Patrick, known to conduct tours of turtle nesting sites at Levera Beach. I interviewed board member Claudette Pitt, who hinted that there has been a decline in poaching at Levera.

SPECTO was founded by a group of senior community members in 2009, and continues to oversee the protection and conservation of Leatherback turtles on its most protected nesting beach at Levera. In 2015, SPECTO was awarded by United Nation Development Programme (UNDP) and Global Environment Facility (GEF) Small Grants to help facilitate the scaling up of its work in the Levera Pond Protected Area and the Levera Closed Beach.

Pitt since the start of the project, there has been a significant decline in the amount of poaching on Levera beach. “Poaching was a big issue, but it has been reduced according to studies conducted by both our organisation and the work of Ocean Spirits, whose main focus is doing research work on the beach every night. So turtles come in, they tag them, count and protect their eggs.” Another mandate of the organisation is to develop alternative livelihoods based on environmental conservation and activism.

SPECTO prides itself on community development especially in the area of employment creation. So far the group has part-time employed 11 people and have since provided further training to certify them to be better tour guides. In addition, patrol wardens have been trained to ensure that incidence of poaching remains at a minimum.

Pitt, in referring to the Country Poverty Assessment said statistically St Patrick has been identified as the poorest parish in Grenada, with Rosehill and River Sallee being the poorest communities within the parish. She said it was necessary for the group to engage the community in this manner.

“SPECTO took the opportunity to get involved by seeking funding to develop our capacity to lead our environmental programme in St Patrick — not only around the Leatherback turtle but around getting the community to take ownership of the environment…we employed 11 [people], 8 tour guides and 3 wardens that are employed from April to July in this project. Most of them come from Rosehill and River Sallee. Right now, we have been training tour guides out of Levera.”

SPECTO was also awarded a United Nations Food and Agriculture Organisation FAO/IFAD MAREP grant to support its work in sustainable rural development. Having received assistance from the Grenada Ports Authority and voluntary assistance for the Conservation Trekkers Campaign, SPECTO continues to work to transform the parish of St Patrick’s into a ‘green’ and environmentally conscious destination.

At the end of the interview, Pitt referred me to Ocean Spirits, a sea turtle research and conservation project based in the northern parish of Grenada. According to their data, poaching of Leatherback turtles on Levera Beach has dropped from 90% to less than 3%.

Marine Biologist Kate Charles, Project Manager at Ocean Spirits stated that “In 2000, Ocean Spirits a Grenadian NGO, implemented a research study in the northeast of Grenada with the aim of evaluating the current status of leatherback sea turtle nesting populations. While sporadic studies in previous years had identified nesting activity in Grenada, data collected by Ocean Spirits since 2000 has shown that the nesting site found at Levera beach alone is home to one of the top 3 populations of nesting leatherbacks in the region, with 600-1,200 nests laid each season. Results from this initial study also revealed high levels of illegal egg poaching, which exceeded 90% poached nests at some sites. Ocean Spirits are actively tackling this issue and have considerably reduced this threat to less than 3% on the main index nesting beach, Levera Beach, through Ocean Spirits beach presence and community education programmes.”

Charles says although a reduction in poaching has been seen in the Levera area which has 1,000 nests per year, beaches like Savon Swayzee — with only around 20-30 turtles nests a year — still has around an 80% incidence of poaching. “It varies each year between 0-5% poaching, but since Ocean Spirits started 90% nest poached or attempted poached [now down] to less than 3 % but on other beaches, the level of poaching is much higher, especially on remote beaches.”

In response to my telling her about the photo I received, Charles said that was incredibly sad, and equally sad that Grenada still has an open season for fishing/catching turtles. While Leatherbacks are protected all year round, endangered Hawksbill and endangered Green turtles are exposed during the annual 7-month long open hunting season, from 1 September to 1 April.

Under Grenada’s Fisheries (Amendment) Regulations SRO 2 OF 2001, any person contravening any of the Fisheries Regulations shall be guilty of an offence and shall be liable on summary conviction to a fine not exceeding $5,000 or to imprisonment for a term not exceeding 2 years or to both.